If there’s one thing backpackers love above all else, it’s cheap beer. Thailand has it in spades, though it might not always taste as wonderful as the wide array of choices here in the States. That doesn’t mean you shouldn’t test the waters, though. Here are some of the best and most popular beer brands found in Thailand. 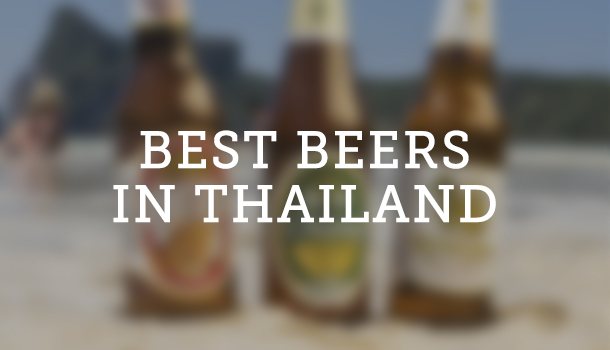 Concentrate on enjoying that beer instead of worrying about your gear. Find great choices of Pacsafe anti-theft backpacks, daypacks, crossbody bags in many styles and colors here. SHOP NOW

Chang
Chang certainly won’t be popping up on anyone’s list of favorites, but it is far and away the best bargain for your buck when in Thailand. It’s famous for what’s affectionately known as the “Changover,” a massive hangover that generally occurs from drinking more than your fair share’s worth thanks to ridiculously low prices. This light pale malt has next to no head, but the flavor is better than PBR and enough to satiate the budget backpacker in all of us.

Thai Amarit Bangkok
A popular pale lager found primarily in Bangkok, this beer is actually brewed for export but you can find it in its home city if you know where to look. Ask a local, though, as tourists tend not to have heard of it. The flavor is mildly sweet with a light hoppy bitterness.

Singha
Singha is probably Thailand’s most popular local beer, and the flavor profile is well above average. The pale lager has been around since the 1930s and is still going strong. It’ll cost you more than many other brands, but it’s still dirt cheap compared to the prices you’re probably used to back home. Whatever you do, don’t insult it if it’s not to your taste—the Thai people are pretty proud of it.

Kloster
Kloster is made in Thailand, but by strict German standards and high scrutiny of Kloster Brauerei. You can bet it packs a pretty great punch and some amazing flavors. It’s not exactly local or officially “Thai,” per se, but considering the available options, you should probably let that slide and give it a go.

Archa
At 5.4 percent ABV, Archa is a tad bit stronger than the average Thai beer, and much cheaper. It’s nothing to write home about, but it’ll certainly get the job done when you’re in need. It’s found more at bars frequented by locals than more touristy establishments, so getting your hands on some can be tricky.

Leo Super
Boon Rawd Brewery, the maker of Singha, also offers a premium beer called Leo Super for those looking for something that might help put them on the floor a little bit faster—it clocks in at 6.5 percent ABV. It’s also the more sophisticated, better tasting brother to the original Leo beer, which is not nearly as strong or tasty.

Phuket Lager Beer
Formerly known as Phuket Island Beer, this is the one you want to taste if you’re looking for fantastic flavors and authentic regional appeal. It’s got plenty of awards to its name. The pale lager has hints of lime and grass and the “fruity” appeal of many island lagers. You don’t have to travel to Thailand to taste this one, though, as it ships internationally and can be found throughout the world.

Okay, we’ll be honest, Thailand isn’t going to stand center stage for their excellent brewing techniques anytime soon. Sometimes you have to take what you can get. If you’re in the country for a visit and want to sample the best of what the country has to offer, you can’t really go wrong sipping any of the beers above.

Related Articles: Where was Beer Invented? , 6 of the Best Beer Festivals on Earth