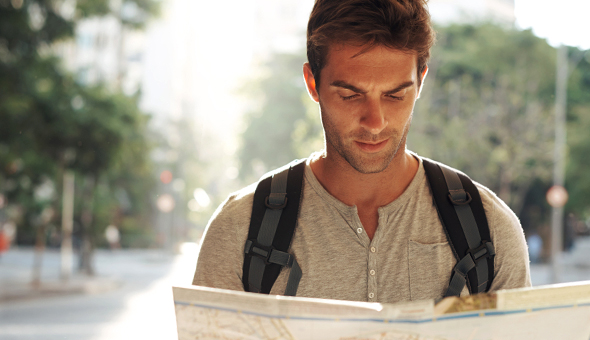 Traveling solo is an exciting experience, but it comes without the added protection of safety in numbers you might be used to having. While men might not face the same perils in solo traveling around the world as women, there’s still risk involved.
Follow these tips to keep yourself, and your gear, safe on the road.
Think With Your Head
By this we mean the one on your shoulders, fellas. As men we’re known for our tendency to get easily distracted by a beautiful woman. Pickpockets know this too, and they’ve adapted by bringing women into their schemes and using them to distract foreign men while someone slips in behind and grabs your wallet. It’s fine to meet new women abroad, but be aware of your surroundings and make sure you’re not getting played.
Take Risks, But Be Smart About It
We’re not going to tell you to avoid experiences that might give you a thrill—where’s the fun in that?—but use your brain when you do. If you’ve never rappelled down a waterfall, don’t go half-cocked without any instruction. Similarly, don’t go scuba diving or swimming with sharks without certified trainers on hand.
Hide Your Money
Don’t leave your wallet in your back pocket unless you’re cool with arriving back at your hotel broke. That’s one of the easiest spots to pickpocket. You probably shouldn’t carry your wallet at all. Instead, store a credit card and a little cash in your shoes, the main compartment of your backpack, or the inside pocket of your jeans or jacket.
Don’t Get Drunk
If you drink, know your limit then drink a little less than what you think you can handle. It’s bad enough getting drunk and doing stupid things in your own country, but getting out of jail in a foreign nation can be a lot more difficult than simply posting bail.
Act Confident, Not Aggressive
Making eye contact is a sign of confidence, so do it often and everywhere you go. Keeping your head bowed or refusing to interact with foreigners can make you seem weak and a prime target. Stand your ground, but don’t act like an idiot out looking for a fight.
Wrap It Up
Diseases don’t stop existing once you cross the border. In fact, there are plenty of countries where STIs are spread at a higher rate than the U.S. If you feel like getting your groove on in a foreign territory, make sure you don’t end up fathering a baby with a girl whose name you can’t even pronounce. Condoms are everywhere, my friend, so don’t be afraid to use them.
Check Your National Pride At The Door
We all love where we’re from, but that doesn’t mean you have to shout it from the rooftop everywhere you go. Leave the sleeveless flag tee in your closet at home. Make an effort to respect locals. Ticking them off and starting a fight over how much better you think your home country is than [insert foreign country] won’t end well for you. If things come to blows who do you think is going to get the best treatment from the police?