Today, there are seven sea turtles that exist in the ocean. The term “sea turtle” may classify turtles to sound the same, but all seven turtles are different from one another.
1. Green Sea Turtle 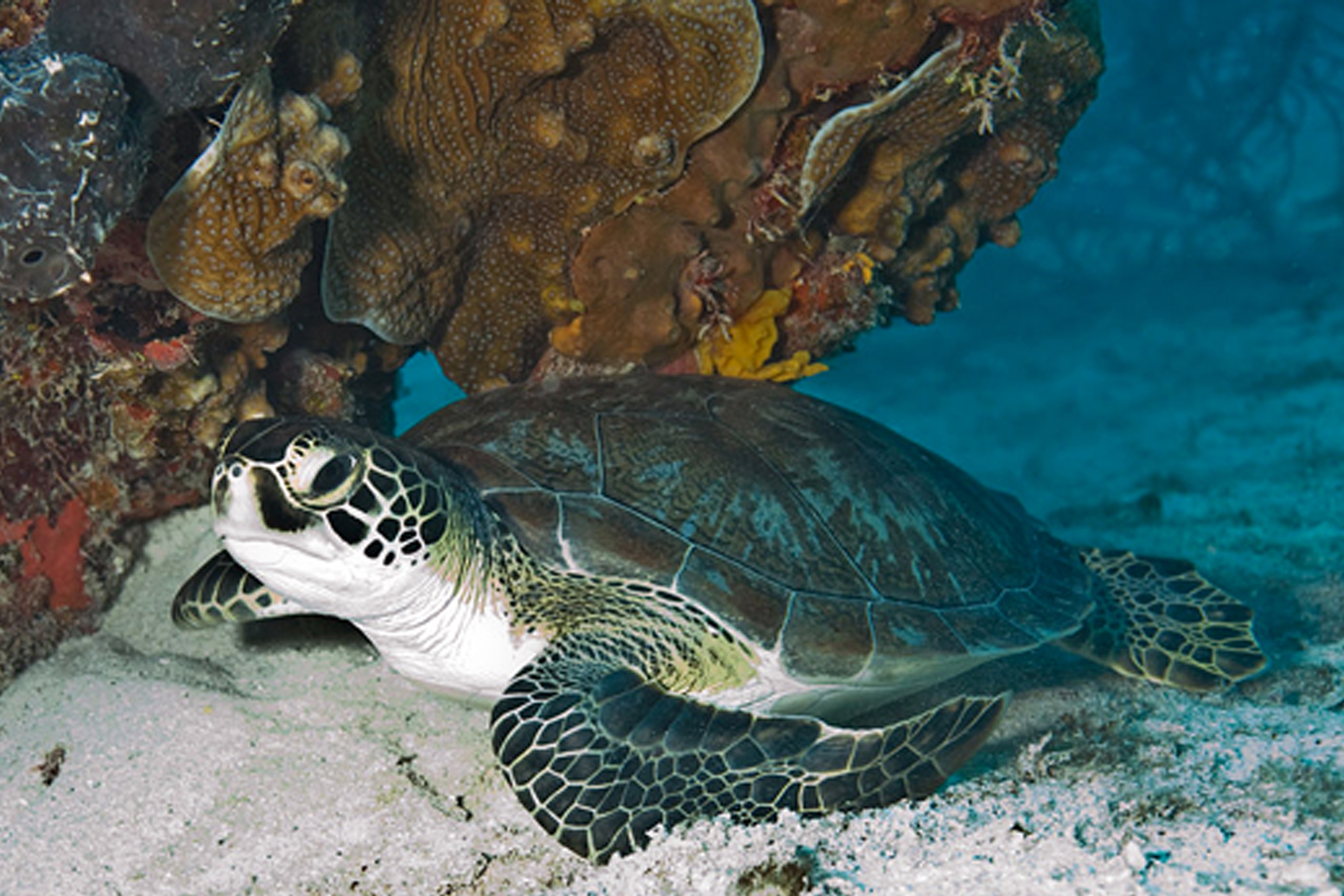 When people think of sea turtles, they often envision the green sea turtle. These turtles weigh about 400 pounds and are 5.5 feet in length. They mostly feed on sea grass and algae. In fact, the pigment from their green diet colors their fat, which gives them their label. Green sea turtles are deep divers and can stay under the water for up to five hours. Females mate every two to four years and populations have dropped up to 65 percent over the last 100 to 150 years.
2. Kemp’s Ridley Sea Turtle 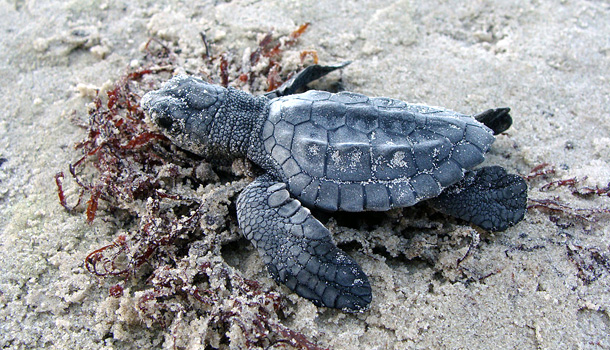 This turtle is one of the smallest turtles in the world. They weigh about 100 pounds and are 2.5 to 3 feet in length. They are grey and green in color and primarily reside in the Gulf of Mexico, Florida and Mediterranean waters. Their diet includes mollusks, jellyfish, crabs and small fish. A mature age is 10 to 20 years old and they can live up to 50 years.
3. Hawksbill Turtle 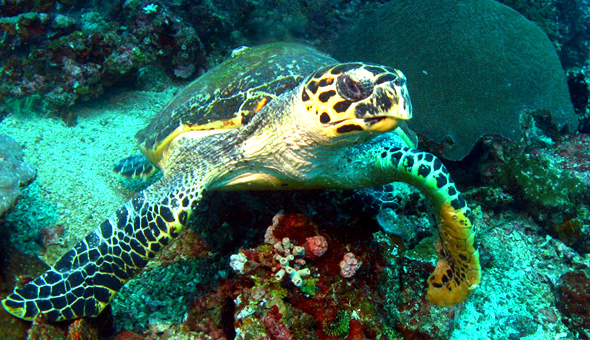 The hawksbill turtle is distinguished by its heart-shaped shell. As the turtle ages, the heart lengthens and the hawksbill grows two pairs of claws on the front feet and mouth similar to a bird’s beak. Hawksbills reside in tropical Pacific and Atlantic waters and desire rocky and shallow areas. They primarily consume sponges along with jellyfish, mollusks, crustaceans and small fish.
4. Leatherback Turtle 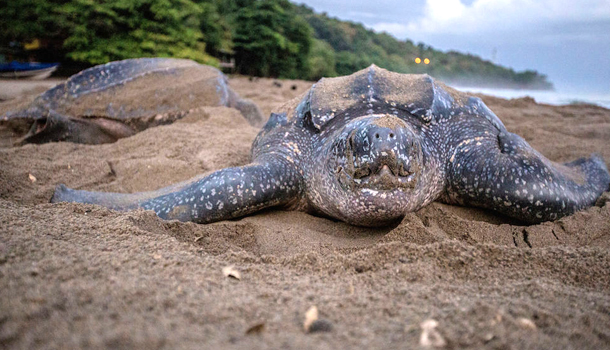 The leatherback is the “big boy” and can weigh up to 2,000 pounds and grows to seven and one-half feet in length. Leatherbacks are the fourth largest reptile, only behind three species of crocodiles. Leatherbacks cruise the entire world, but are regularly found in Florida, St. Croix and Puerto Rican waters. They have a large appetite and can travel hundreds of miles in search of energy from jellyfish. Unfortunately, jellyfish are rough on their digestion, which causes an intestinal block. When food is not available, they will eat plastic bags, as it resembles a jellyfish.
5. Loggerhead Turtle 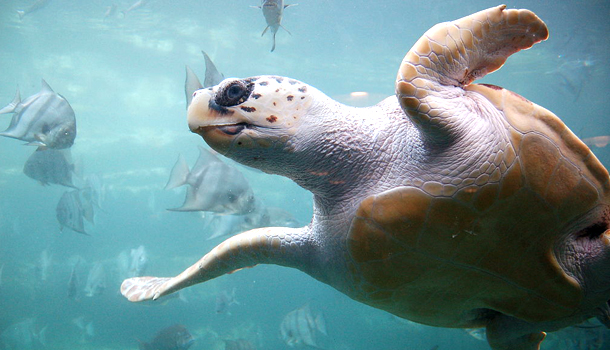 The loggerhead is most notable for its large head. The body is shaped similar to a heart and can grow up to 250 pounds and 3 feet in length. These turtles love sandy beaches and are common throughout Atlantic, Pacific and Indian Ocean shorelines. Large populations are found in the Bahamas and Mexico. These turtles are not ready to mate until they reach 33 years of age.
6. Olive Ridley Sea Turtle 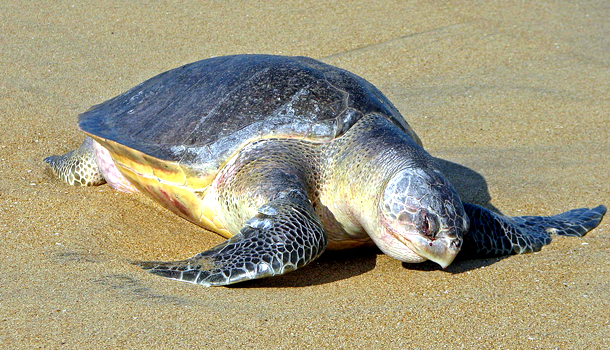 These gray and green heart-shaped turtles weigh up to 100 pounds and grow to less than 3 feet in length. They are the smallest sea turtles and live in Pacific waters, mainly in Mexico. Olive Ridley’s consume crustaceans and jellyfish, but will eat algae if no other options are available. They can birth up to 100 eggs and mature sexually around 15 years.
7. Flatback Sea Turtle 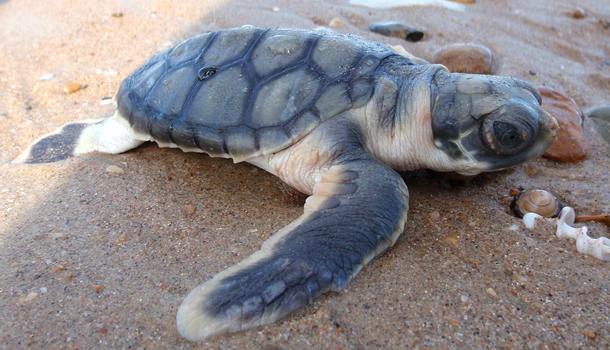 The Flatbacks weigh up to 200 pounds and can grow up to 39 inches in length. They prefer coastal reef waters and reside in Australia, Indonesia and New Guinea waters. They are “loners” and can live up to 100 years in age.
The Pacsafe Turtle Fund
The Pacsafe Turtle Fund was commemorated in 2014 and aims to support endangered sea turtles globally by providing annual grants to local and reputable initiatives that are working to conserve turtles around the world. Our turtle fund is directed towards projects that conserve the most endangered species such as leatherback, loggerhead, green and hawksbill turtles. As of 2014, we’ve chosen eight conservation projects and invested in over $125,000 in our Pacsafe Turtle Fund.