Fresh ocean air. Fresh fish. Refreshingly friendly people.
That, in a nutshell, is what you can expect from Canada’s three maritime provinces: New Brunswick, Nova Scotia and Prince Edward Island. From fishing towns to funky small cities, from Celtic culture to Acadian culture, the Eastern Canadian provinces offer an indescribable magical quality that is particularly alluring for travelers looking for something that’s a little different.
A list of must-visit places in the Maritimes would probably take you days to read through, but we’ve distilled it down to three must-visit hidden gems. Whether you make them the focal point of your trip or just a stop along the way, you definitely won’t want to miss these one-of-a-kind communities.
Mabou, Nova Scotia 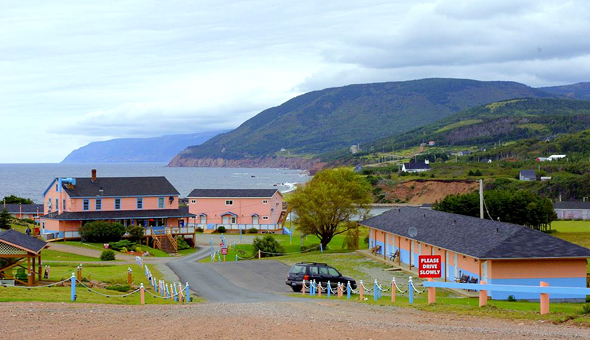 Driving up the Cabot Trail on the island of Cape Breton, you’ll find yourself passing through several villages that, despite their small populations, are huge in character. They’re all worth stopping to explore, but Mabou just might be the most charming of them all.
If you live for the outdoors, check out the Cape Mabou Highlands. A network of trails allows you to choose your own adventure, whether that’s hiking along ridges over the Atlantic ocean, working your way through thick forest or walking through some stunning meadows.
For a taste of Celtic culture, head to the Red Shoe Pub on Friday or Sunday evenings to experience a Ceilidh that you’ll never forget. Everything on the menu is out of this world, from the BBQ pork fries to the pan seared scallops.
One last recommendation: if you get the chance, head to the Glenora Distillery for a tour of North America’s first single malt whiskey producer. There’s a quaint inn on site, and you can even bottle your own whiskey.
Alma, New Brunswick 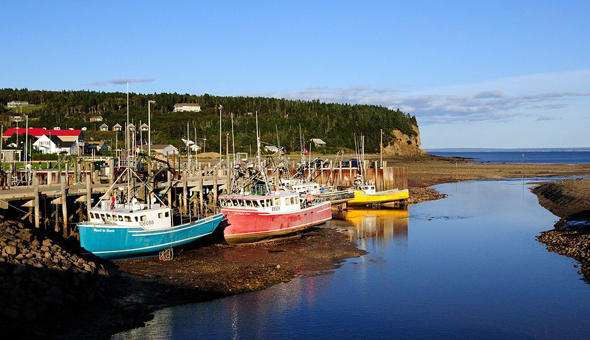 Fundy National Park is well-known for being a hiker’s paradise, with 60+ miles of trails weaving through the forest, along the coast or past one of 25 waterfalls in the park.
But just outside the southeast end of the park lies a small village called Alma, population 232 and home to the famous Alma sticky buns. Head to Kelly’s Bake Shop to pick up one (or, more realistically, a dozen) of these sweet treats. For something more substantial, visit An Octopus’ Garden Café for a hearty and healthy home-cooked meal.
You could easily spend hours, or even days, exploring Alma’s beaches on the Bay of Fundy. Watching the tides is an exceptional experience, as the bay is home to the highest tides in the world. The water can climb up to 40 feet between low tide and high tide—you have to see it to believe it.
St. Peter’s Bay, PEI 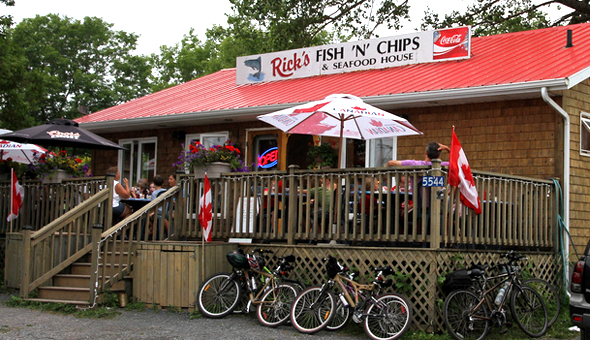 St. Peter’s Bay is the perfect place to serve as a home base while exploring Prince Edward Island. This small community is home to some true hidden treasures, starting with the The Inn at St. Peter’s, where you can stay in your very own waterfront cottage.
Wake up early to catch the fishermen in action, then head to the Olde School Diner for breakfast. As the name suggests, it’s literally a diner set up in an old school. For lunch or dinner, you can’t beat Rick’s Fish and Chips. A lot of places claim to have the best fish and chips in the world, but Rick’s really does.
We’ll leave you with one parting tip: the best part of each of these communities is the incredible people who live there. Take the time to speak with the locals to find out what drew them to their town and what keeps them there. Ask what their favorite things to do are, and you may very well uncover some of your own hidden gems.