Driving a Rental Car on Vacation 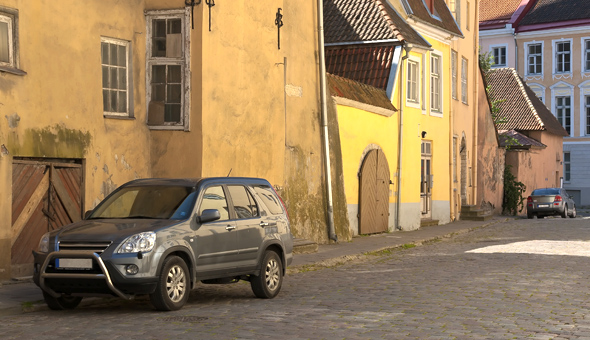 Driving a rental car is usually an adventure; even more so when on vacation. Not only are you driving a strange vehicle, but you’re probably driving in unfamiliar territory as well.
Change is Good, Sometimes
Every time I’ve rented a car it’s been different; I’ve never had the same model of car twice. When out of the country I’ve had models that have never hit the shores of the U.S. Some were so small, most of us wouldn’t fit in them anyway. The mirrors are in different spots, the seat adjusts differently, and don’t get me started on the dashboard gauges and controls
I started It So Here Goes
Just recently we rented a Ford Fusion in Florida. One glance at the dash and I felt like I had fired up the Starship Enterprise. Luckily I was with my trusty co-pilot and navigator (The Wife) and it’s the co-pilot’s job to figure out the A/C and the stereo. She had a heck of a time and we never did get the same station twice on the radio. Also, not to complain, but I froze my you-know-what off for three days because the A/C requires an engineering degree to figure out. Then there was the back-up camera. I’ve never used one, but may as well get used to it; all cars will soon have them.

All Bets Are Off Overseas
If you’re renting in Florida it’s a whole different animal than renting in say, Mexico or the Virgin Islands. Not only will the models be different, the driving itself gets strange to dangerous. In the Virgin Islands they drive on the wrong side of the road. I know they’ll tell you it’s the right side but trust me, it’s not the right side. You sort of get used to it and then you have to negotiate a roundabout, or any left turn and, it’s just weird. Add in the fact you’re unfamiliar with the car and it gets interesting. Then it rains and try to figure out the wipers, while turning left from the wrong side and boy, now you have that adventure you went on vacation for.
Different Rules
We rented a jeep on Cozumel Island in Mexico that had no gas cap, and what worried me the most: no license plate. I guess they figure you’re not going far, being on an island and all. The clerk claimed the rental business was owned by the Chief of Police, “so don’t worry about it.” Maybe that’s why we drove east through a D.U.I. checkpoint that was pointed west by following his directions. It pays to rent from the Chief of Police.

Just Say No
When you walk up to the car rental counter to get your car, do what I do now. I walk up and immediately say, “No, no, no and no.” Hopefully that will save some time because, no, I don’t want a million dollars comprehensive or liability insurance; in Florida they even tried to get me to buy tire insurance. No, I don’t want to upgrade to a Camaro, and no I don’t want to upgrade to a convertible either. I may be on vacation but I just want what I ordered. If I wanted a Camaro convertible with a million dollar insurance policy, plus tire coverage and a pre-paid fuel plan, I would have ordered it.
You’re Marked
Though they are getting away from it these days, rentals used to have certain numbered license plates. Unfortunately the criminals where you vacation are aware of this as well and you may as well be driving with a rented car sign. Years ago a scam in Miami had crooks rear-ending rental cars, and then robbing the victims when they got out of their cars. This went on for quite a while and the good folks in Miami figured this out and stopped the practice of all rentals having certain numbers on their plates. In other countries, you stand out in a rental car either because of the plates or because you’re the only one without dents. You should be extra careful and always stash your possessions out of sight. That is, unless you rent from the Chief of Police; nobody touched that jeep and it didn’t even have locks.