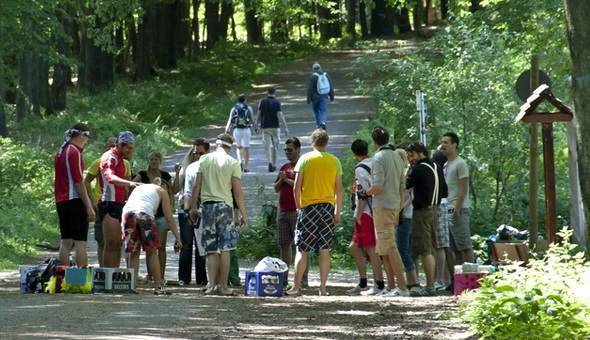 Father’s Day, or Vater’s Tag, in Northern Germany is an outrageous spectacle consisting of “bier,” brats, and manhood. The origins of this day are based on the public holiday Christi Himmelfahrt (Ascension Day), which marks Jesus’s ascension to the heavens. It is the 39th day after Easter Sunday and falls on a Thursday. In some areas of Germany, it is also called, “Men’s Day,” where men flock together to eat, drink and celebrate manhood.
On Thursday, May 14, 2015 I sat in my apartment on the quiet morning to edit my book manuscript. Around noontime, I heard loud bouts of techno music playing outside my window.
Confused, I opened the window and gazed at two separate groups of men dressed in sombreros and balloons; one was dragging a wagon stashed full of booze while the other dragged a speaker on two wheels. Surprised, I screamed, “It’s Himmelfahrt! I completely forget.” Locals told me tales of this epic German party where men drank from morning to night lugging wagons around Hannover’s Maschee Lake.
Excited, I grabbed my bike and rode throughout the chaotic streets of Hannover toward the lake. In Germany, it is legal to drink in public spaces, so I was expecting this to be quite insane. My bike ride around town made me laugh so much—it was quite the sight to see all of the mass public intoxication. One of the first wagons I came across on my way to the lake had a group of people carefully balancing shots of vodka on the top of the cart while walking over cobblestone streets for four kilometers to the lake.
At the lake, I biked through a crowd of men, already drunk, singing, playing games, blaring techno music, and cooking bratwurst on portable grills. I stumbled upon a nerd-inspired wagon where R2-D2 proudly held a beer and a cardboard cutout of Darth Vader overlooked the lake. Men dressed as lobsters pinched their two-pronged hands to slice open another beer. The atmosphere was eclectic and hilarious.
By mid-afternoon, every man was in his prime state of drunkenness. This is when the “good ideas” evolved and games began. People drove tricycles and dragged their buddy sitting on a sled enjoying an ice cream cone. Men sat on bridges overlooking the lake while releasing multi-colored smoke bombs. Others cooked German tube steaks with their left hand while downing a beer with their right hand. Germans know how to drink and handle their alcohol. They have amazing constitutions that can eat, drink and be merry for hours without gaining one pound.
The puking and passing out began around 4:00 p.m. for those who drank at frühstück (breakfast). Some decided to taunt the cops with monkey-like actions, but the cops remained calm. Around the same time, the wagons congregated to the “Rathaus,” or city hall, where the barbeques and beer tents reached maximum capacity. At this point, girlfriends and and other ladies joined the groups to encourage reckless behavior such as rolling down hills while holding a beer. Old 80-year old German women walked with their canes and grim faces in disgust at the boisterous youth.
German holidays are prime days for open-air and electronic parties. If they even finally have enough, the German partiers will go to bed during the late evening hours. But those with enough energy find their way to the nearest techno club to party until 10 a.m. the next morning. If your holidays are a little dull, head to Germany. Because nothing praises the good Lord better than an epic 24-hour beer fest and a 12-hour German techno party.