Lourdes: A Town of Immaculate Conception

The town of Lourdes doesn’t often get much notice outside of Christian religious circles, but it’s certainly worth a visit for those who don’t find themselves so spiritually inclined. This little town nestled at the foot of the Pyrenees Mountains in southwestern France boasts some of the country’s most beautiful architecture and a history steeped in mystery and intrigue.
The Story
Catholics know Lourdes as the town where the Virgin Mary came down from the heavens and visited a poor beggar girl named Bernadette. The story goes that Bernadette was gathering wood on the outskirts of town when she came across a cave where Mary appeared. Townsfolk were skeptical, but Bernadette continued to visit the grotto and said that the Virgin Mary visited her 16 times before declaring herself the Immaculate Conception.
Henceforth, the townsfolk set forth to build an enormous chapel now known as The Sanctuary of Our Lady of Lourdes, a shrine to the Virgin Mary that is one of the largest Catholic pilgrimage spots in the world. Roughly 5 million people visit the site each year hoping to receive blessings and miracles to cure them of their illnesses. 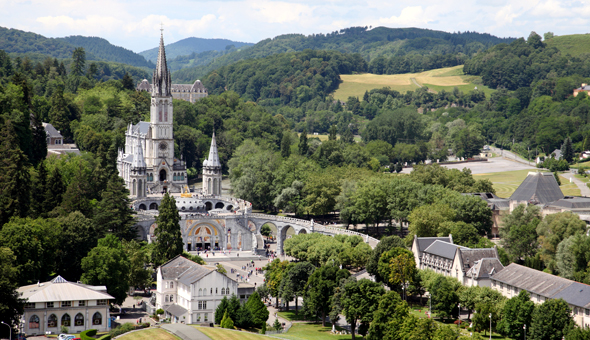 The Town
Lourdes has, truthfully, become something of a kitschy tourist trap and can seem a tad silly for those who don’t believe in Christianity. However, the chapels lining the city and the depth of devotion of the followers here is a site to behold, and a little awe-inspiring.
You’ll find the main thoroughfares are covered, wall to wall, with shops selling rosaries, statues, plaques, photos and other emblems to commemorate the Virgin Mother. You can even buy small bottles to fill with the holy water seeping through the walls of the chapel. People spend hours in line on busy days just to run their hands along the cave where Mary was said to have appeared.
The town itself is beautiful, surrounded on one side by the towering hills of the Pyrenees and full of waterways and cobblestone streets. As a town with so much Christian faith bustling through every corner, it comes as no surprise you’ll find your fair share of Italian nuns and priests living amongst its walls. One of the best perks is the amazing amount of Italian food in this little French town.
A highlight, though, for anyone not particularly interested in the religious history, is the Château fort de Lourdes, a looming castle standing steadfast atop a hill overlooking the valley and the town. It sits at the opening of the seven valleys of the Lavedan and provides spectacular views of the area.
For a small fee, guests are free to tour the grounds and explore the Roman-era architecture and battlements left standing, which date back as far as the 11th century.
The focal point of the town, the Sanctuary of Our Lady of Lourdes, is home to numerous minor basilicas like the underground Basilica of St. Pius X. Made entirely of concrete, the modern basilica was a small point of controversy but brings in numerous crowds thanks to the draw of it being partially under the street.
Lourdes is also the perfect home port for the Ossau Valley, a beautiful piece of land that ranks among the top hiking spots in all of France.
If you can handle the somewhat over-the-top commercialism happening in this once-devout town, Lourdes is a wonderful place to visit for a day. The artwork and architecture alone are enough to keep the casual tourist busy for a few hours, and you likely won’t regret making the trip. 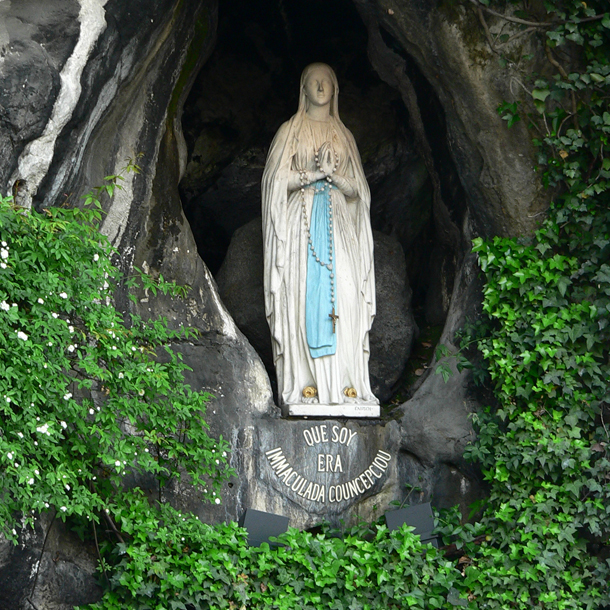