I wanted to share some of the stories behind some of my most memorable images! 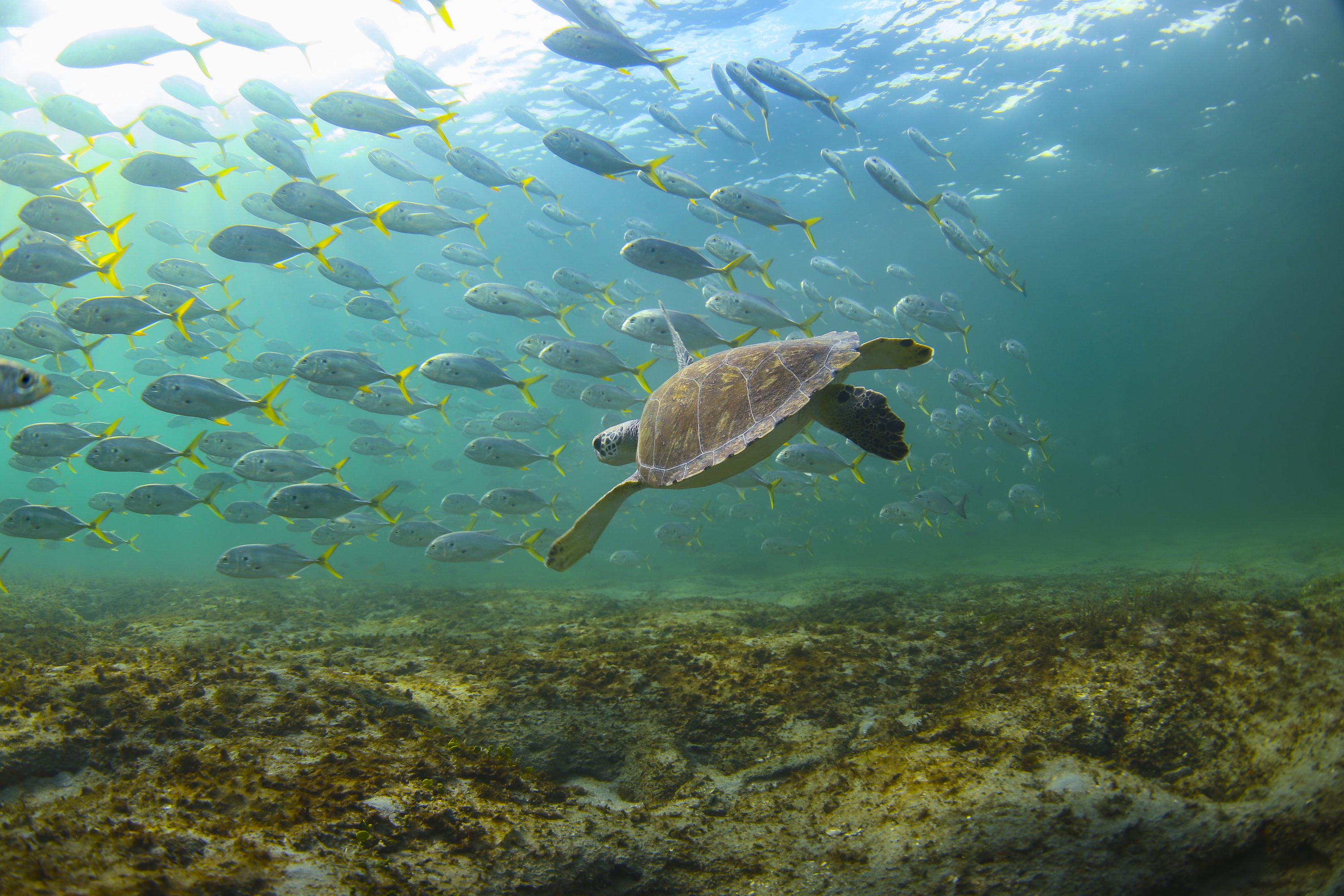 The image above was on a typical morning exploration on our reefs.  I was photographing this juvenile green sea turtle for about two hours, slowly getting closer as long as it was comfortable with me being there.  Then on one dive down, as I photographed him a massive school of jacks screamed by us.  Startling myself and the turtle.  It was in the fall where there a lot of bait fish, so they were darting along at high speed. 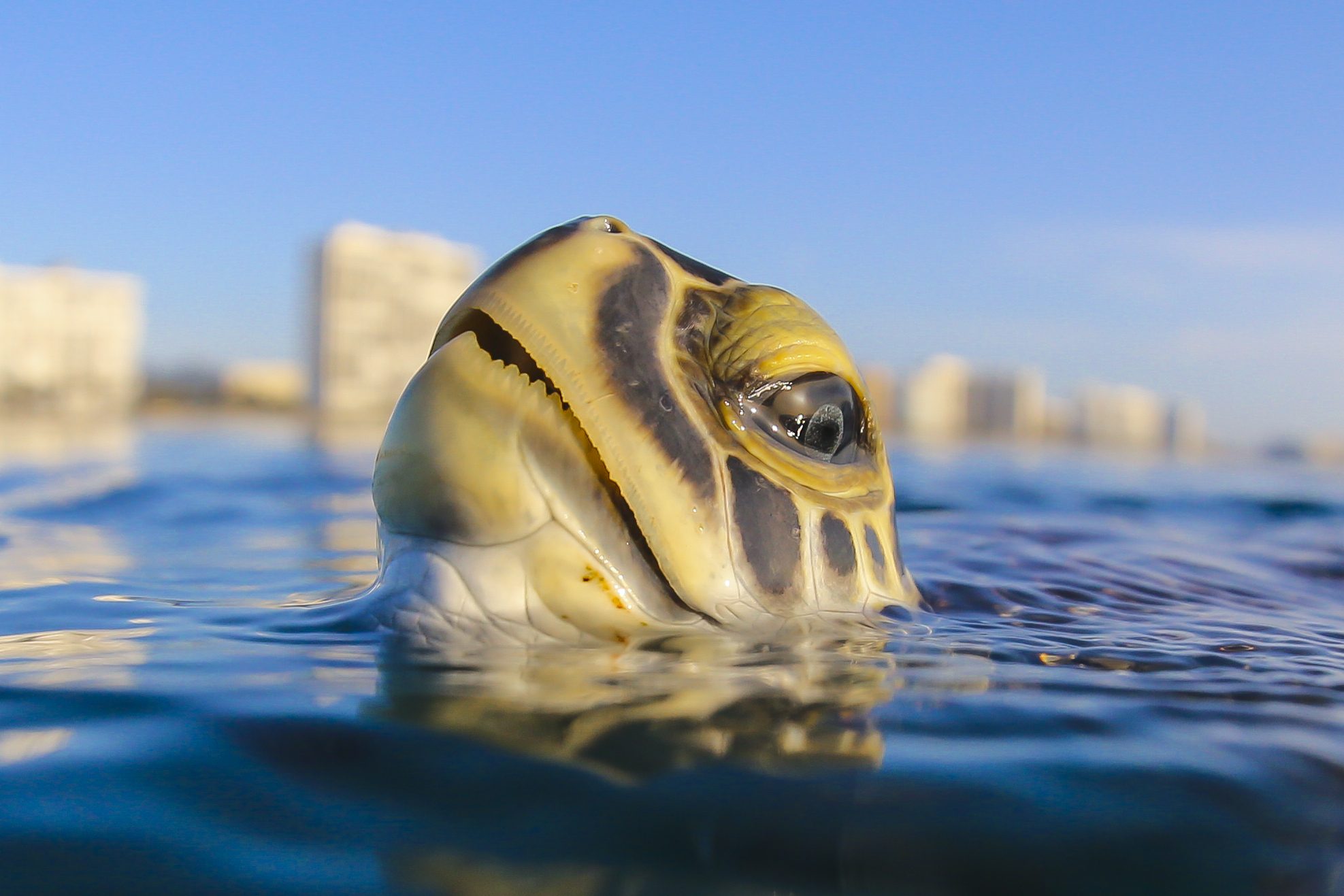 I take a lot of time in the water to observe and understand a sea turtles behavior before I take an image.  This particular photo was in Boca Raton, Florida with a very calm and collective green sea turtle.  The image is cropped so I wasn’t as close as it seems but still about 3 ft. away.  It was a glassy day creating a great set of reflections on the surface.  The towering condos in the background paint the picture of today’s growing urban areas intruding on mother nature. 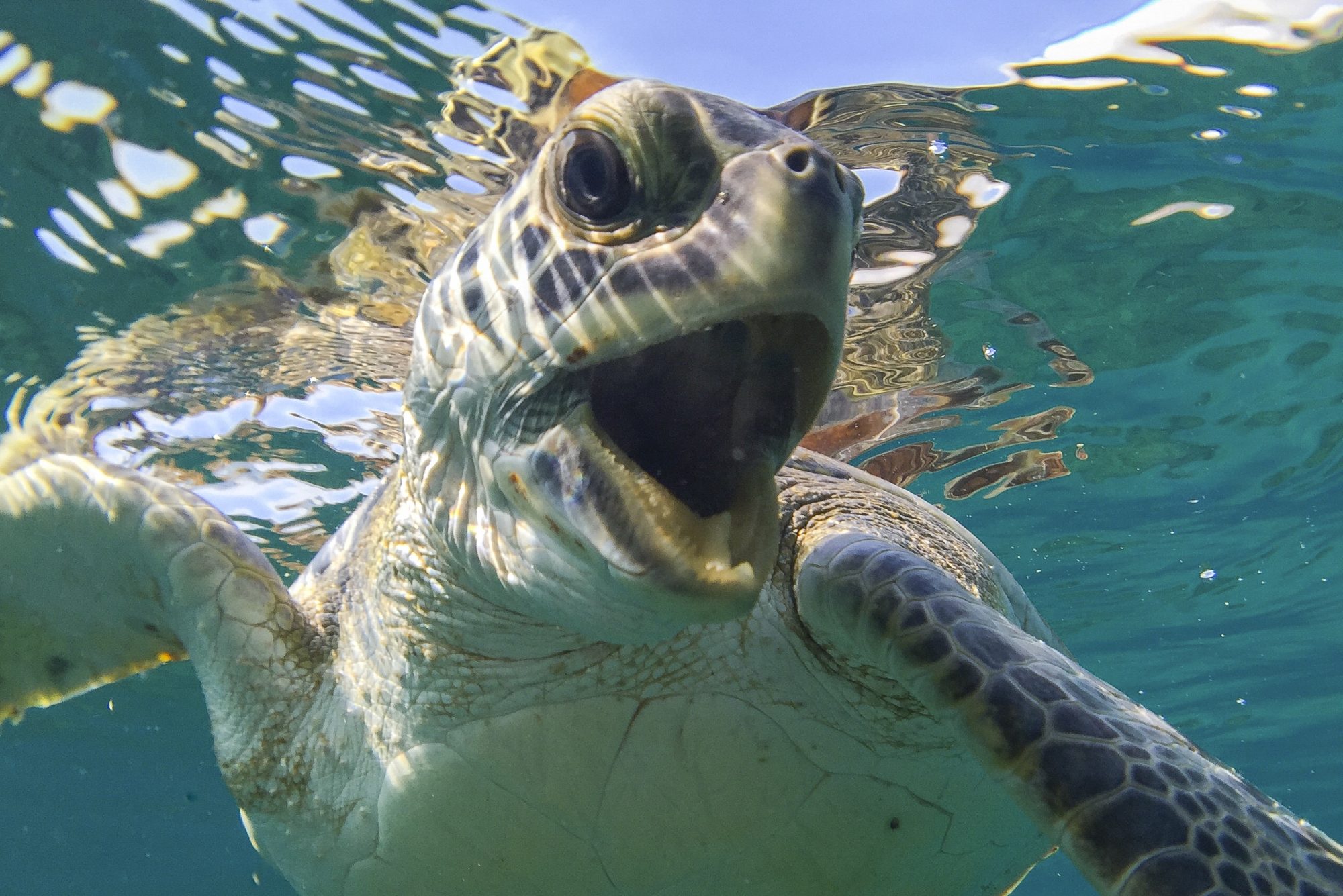 This guy was ready for his portrait!  I was out in Deerfield Beach, Florida photographing schools of fish and this friendly turtle.  That morning I literally filled up my memory cards there were so many good opportunities!  Luckily I still had my iPhone inside my housing and was able to continue shooting!  Yes, this is shot with my iphone 6! 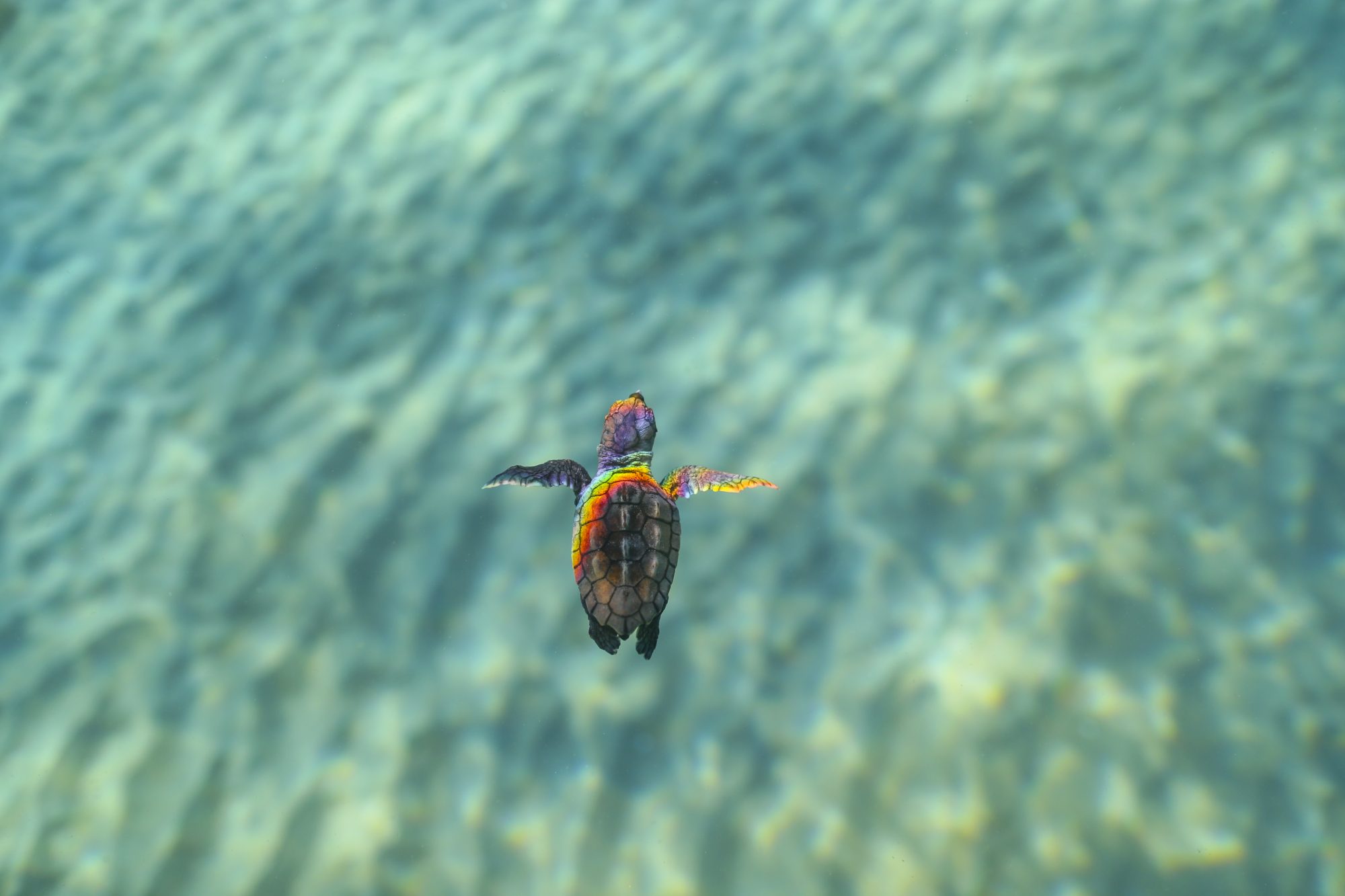 Some photos are a combination of timing, preparation and a lot of luck!  I have been photographing hatchling sea turtles for over 10 years!  This image above came out after so many missed attempts!  It was shot with my favorite lens, the Canon 24mm 1.4 II inside an Aquatech housing.   The shallow depth of field is created from the lens.  The background is the sea floor about 4ft below.  The rainbow on its shell is from the refraction of the early morning sun on the surface, shooting down below.  Getting that prism color to hit the turtle is a long shot!  So stoked when I saw this one come out!  Sea turtle photography is all about getting creative! 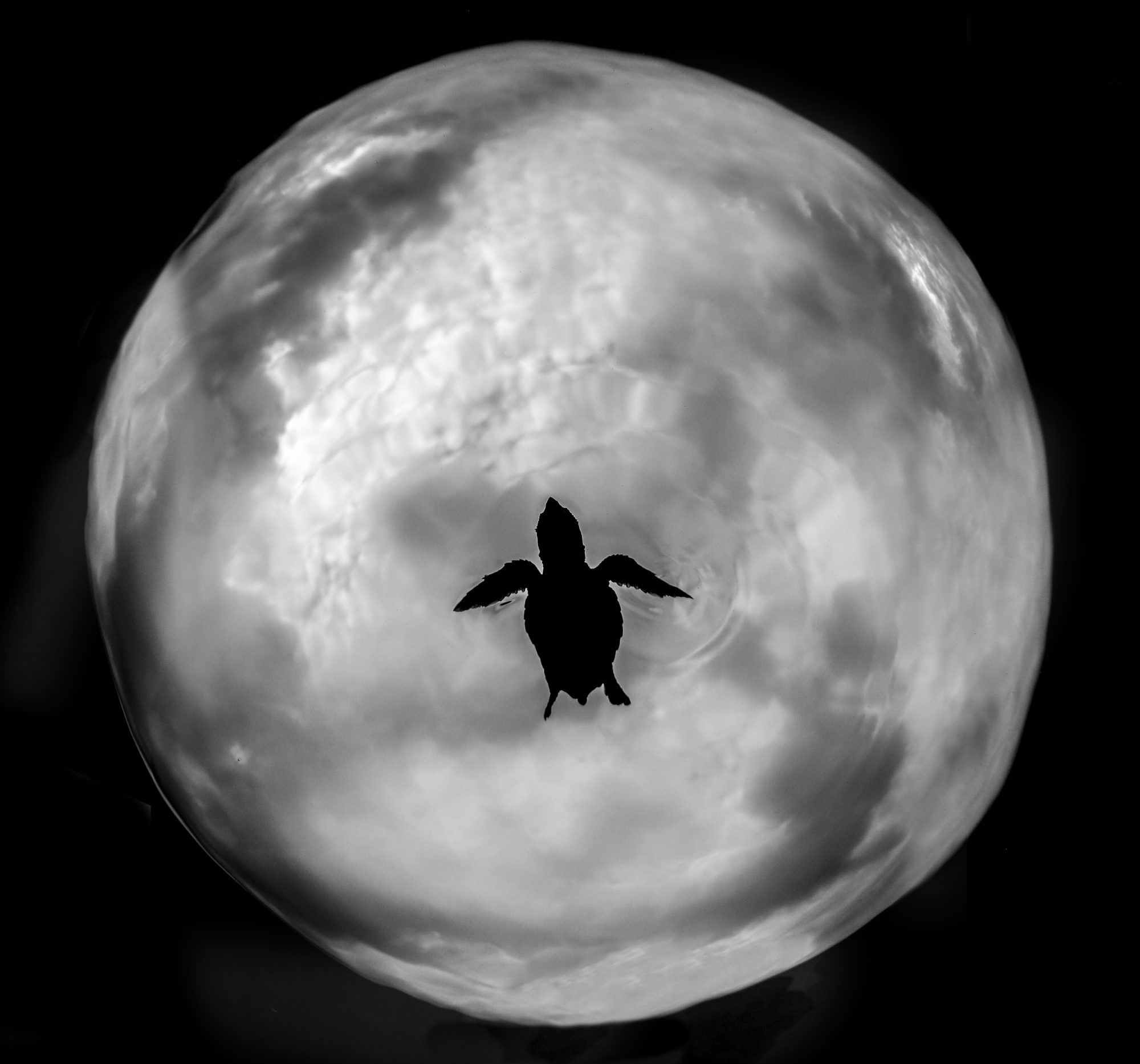 One in ten years!  I have been trying to get this “moon” image since I started photographing sea turtles.  Noticing the clouds were perfect this particular morning for the image I had in my head.  I zoomed out my fisheye lens to include the extreme vignetting (black areas), something you would normally never do.  Then proceeded to swim out with my camera out in front of me, upside down just below the surface.  The key was to not create ripples on the surface as it would distort the clouds!  Baby loggerhead sea turtle in Palm Beach, Florida! 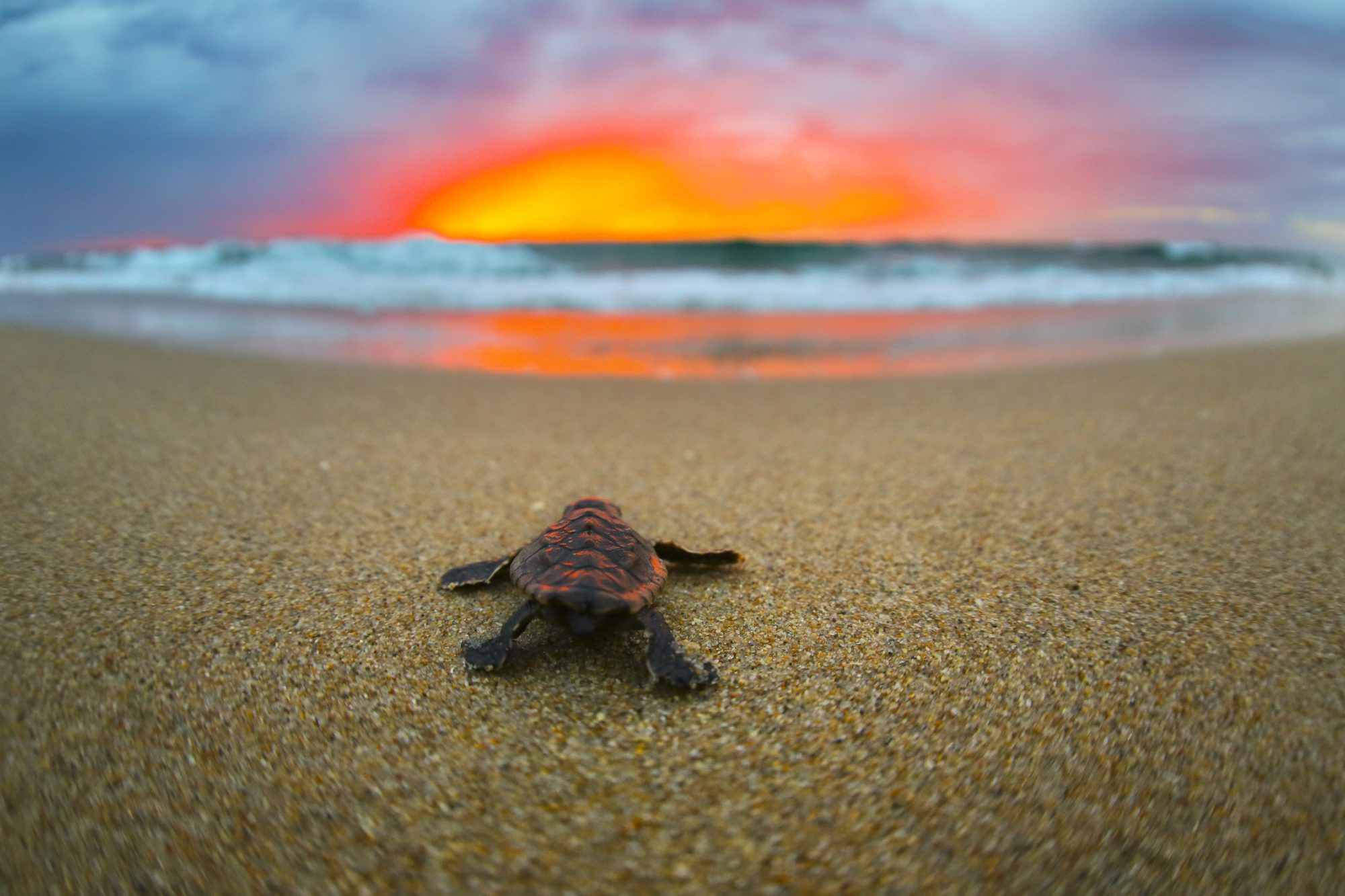 Dedication and persistence is so important in becoming a successful nature photographer!  This particular morning it was windy and raining.  As I hiked down the beach hoping to see something and began to think I should turn back.  Lighting was dark and the water was very turbulent, two things that don’t usually measure up for a successful image.  I kept at it and sure enough saw an little guy heading out to sea.  Just before he reached the waterline the sun came through and lit up the clouds!  What a sunrise!  It lasted less than 2 mins and was all I needed!  Loggerhead sea turtle in Boynton Beach, Florida. 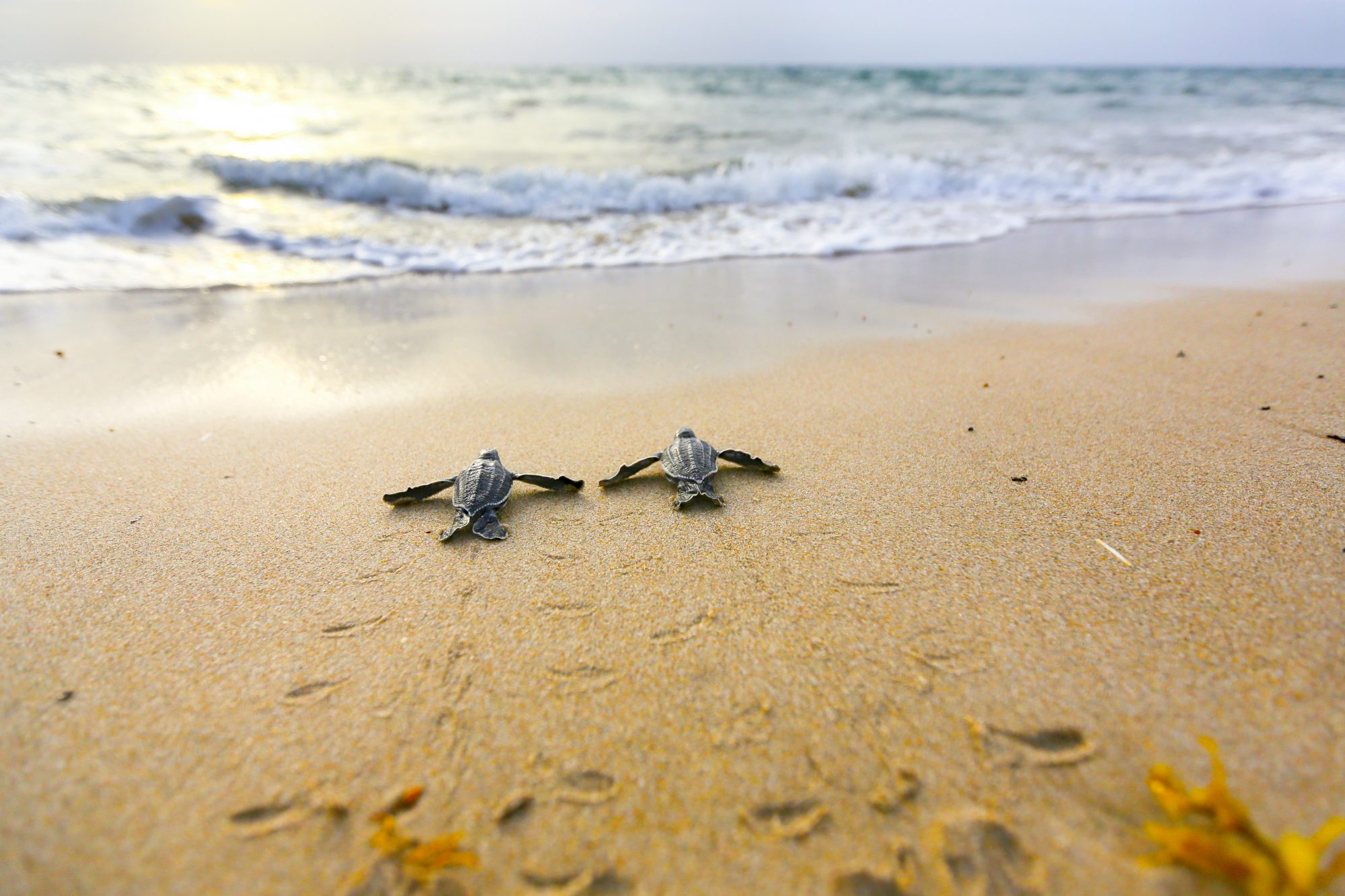 I often try to tell stories about life with my nature images.  This is one that can be read in many different ways!  Two leatherback hatchling sea turtles head out to sea alongside one another.  They are siblings that will never see each other again as they part ways into the deep blue Atlantic Ocean.  The pair often represent meanings for many of my fans.  Friends, partners, lovers…. you name it!  It’s an image that’s about the love for one another and the beach!  But in reality these two will probably never see each other again. 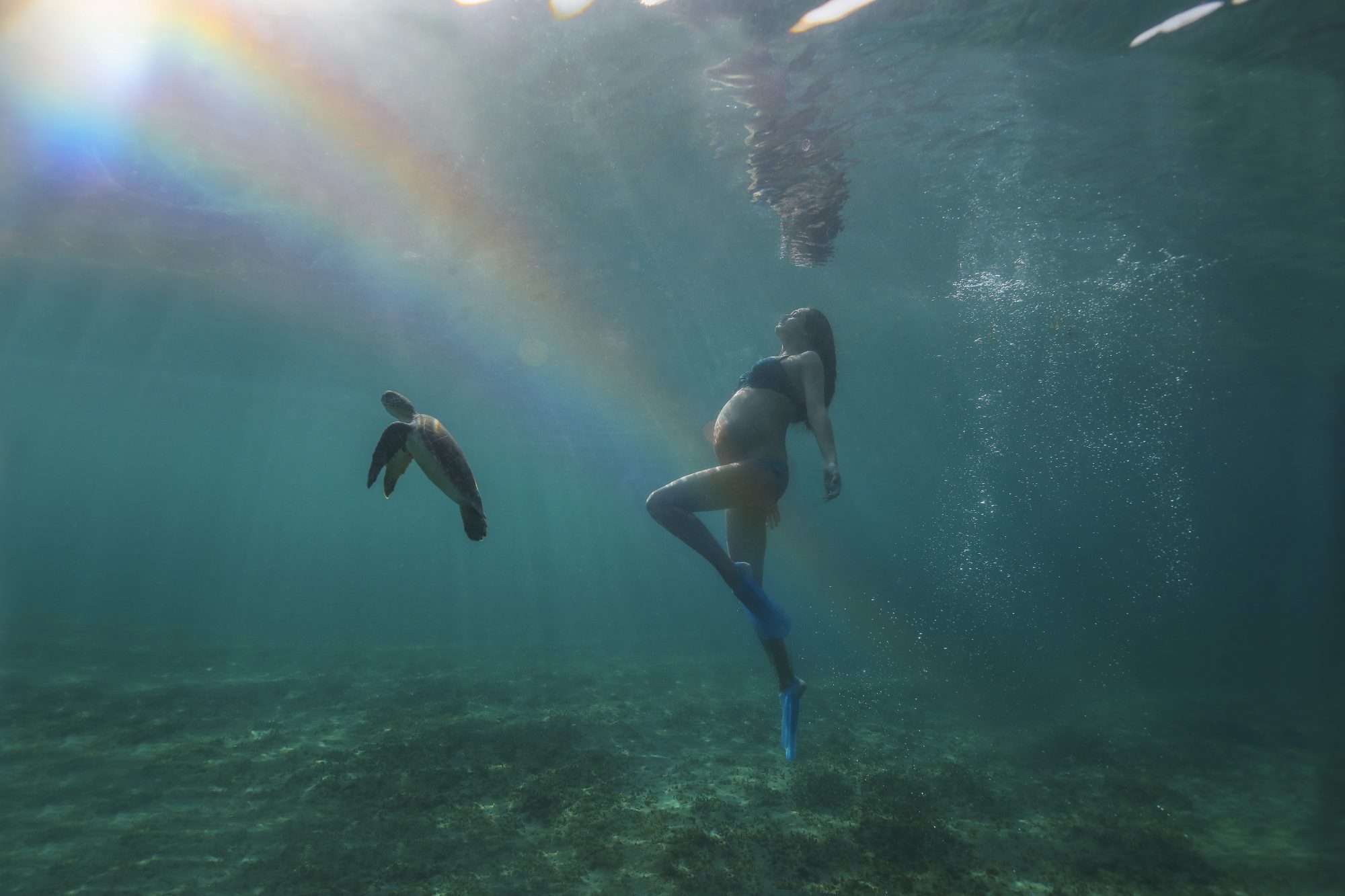 This is the newest image from the collection I am discussing.  That is my beautiful wife Cristina on the right, alongside a juvenile green sea turtle.  As I write this our daughter, who was in her belly at the time of this image was taken.  She is now 3 weeks old!  Serena was born one week after this was taken!  We swam with this turtle trying to get this image for over 2hrs.  Lining up my wife, the turtle and the reflecting prism was not easy difficult to get.  Shot in my hometown of Boca Raton, Florida. 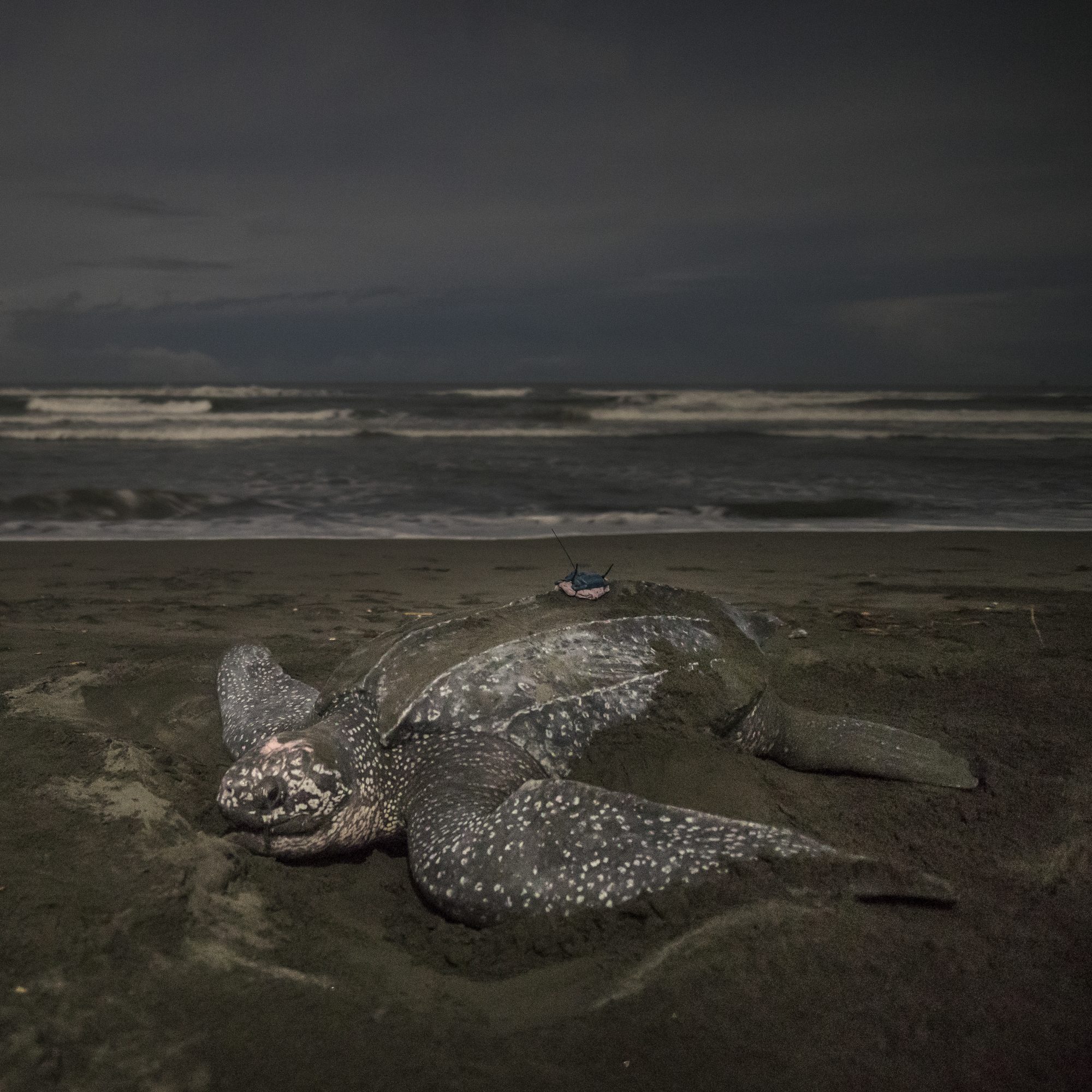 We are on earth for a very short amount of time, unlike these dinosaurs who have been around for a very long time!  This is a large female leatherback, the largest sea turtle in the world.  This image was taken on a trip with the Sea Turtle Conservancy to Panama earlier this year.  It was shot in complete darkness with today’s latest ISO technology.  We were there to tag 4 females as part of the Sea Turtle Conservancies annual Tour de Turtles program.  You can see the transmitter on her back that will tell us where she goes after laying her eggs over the next 1-2 years.  All to learn more about these amazing animals.   I try my best to make a difference by working with all types of organizations who I can work with to use my images as a voice in conservation. 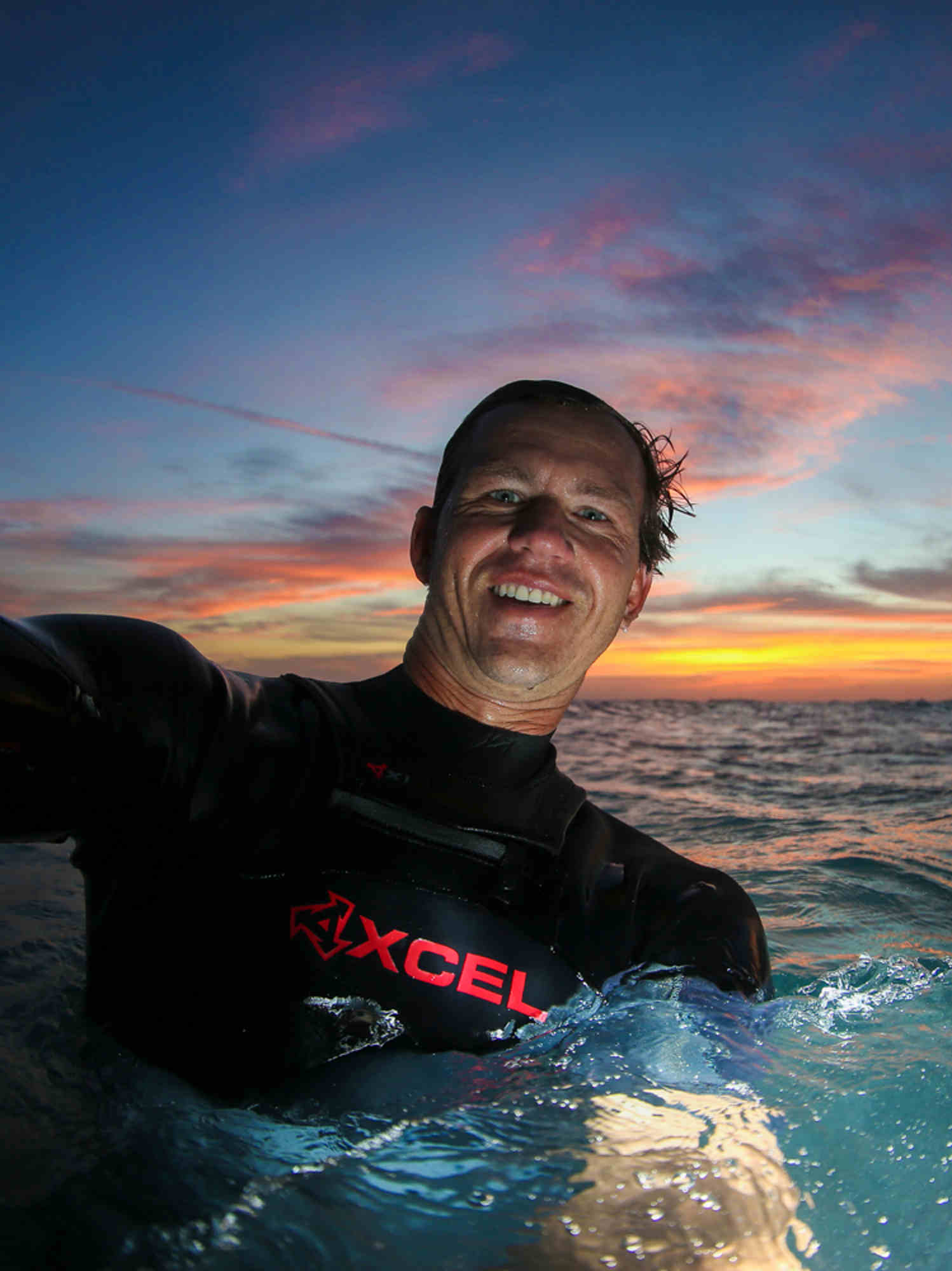