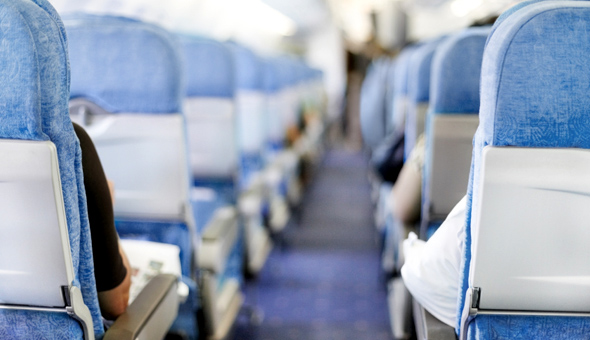 If you’re tired of having to squeeze into tiny seats every time you fly, pay attention. There’s at least a chance this is going to change in the near future. At least if Congressman Steve Cohen has a say in it.
Cohen, who’s a member of the House Transportation and Infrastructure Committee, is fighting to pass a bill “to establish minimum seat size standards for the safety and health of airline passengers.” According to an announcement posted on his own website, Cohen aims to raise an important issue: the shrinking size of airplane seats actually poses a safety and health risk. “The FAA requires that planes be capable of rapid evacuation in case of emergency, yet they haven’t conducted emergency evacuation tests on all of today’s smaller seats,” says Cohen on his site.
In addition, Cohen cites concerns regarding health issues such as deep vein thrombosis, which can be caused by long periods of sitting in the same position, without being able to stretch or move around. And with small seats restraining leg position (especially for taller passengers), the risk of the condition increases.
Cohen definitely has a point. Airline seats have shrunk considerably since the 1970s. Seat width, which used to be 18 inches just a few decades ago, it’s now 16.5 inches. Seat “pitch”—defined as the distance between any point on your seat and the same point on the seat in front of you—has shrunk from 35 inches to 31 inches today. Add to that the fact that the average American is about 30 pounds heavier than in the 70s, and you’ll understand why Cohen is adamant that things need to change.
Other Things To Consider
Cohen’s ultimate goal is to set a standard regulatory minimum for both seat width and pitch, although pitch (what you would call “leg room”) is a more important and more urgent point. The bill makes no mention of what those standard minimum would be and does not address whether it would freeze the numbers at what they presently are or if it would require airlines to modify their planes to meet a larger number. Those are things that would be decided later on, based on expert advice.
What Happens Next
The House Transportation and Infrastructure Committee had a chance to vote on the bill on February 11th, 2016. At the meeting, the bill gained 26 votes but had 33 votes against—meaning it didn’t pass. Luckily, this isn’t the end for the bill. Cohen plans to reintroduce it as an amendment to the law (rather than as a stand-alone bill like he originally did) in the future. So while the minimum seat standard is not here yet, there’s still hope.