When I think of Morocco, I think of the desert, with its rolling dunes of yellow sand. I picture the old cities with their orange buildings close together creating a labyrinth of alleyways to get lost in. And I imagine the ancient sites of ochre mud bricks or stone, built by civilisations long gone.
If I was to define Morocco by colour, it would be orange or yellow. The country glows with the radiance of fire.
That’s why it’s such a pleasant surprise to find pockets of blue in Morocco. They stand out from the normal hue, like vibrant sapphires in a golden crown.
I love these spots of blue. They make such a beautiful change from most of the landscapes in the country. And each has its own special story. Let me share with you six gems of blue you can explore for yourself in Morocco.
The port of Essaouira 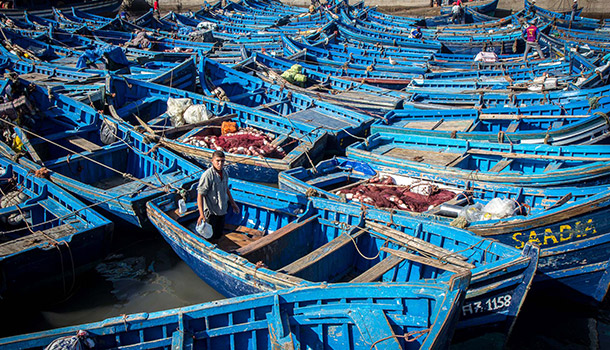 The small city of Essaouira is on Morocco’s western coast, just a few hours drive from  Marrakech. It is a port city and, at its peak in the 18th and 19th centuries, was the most  important trading centre between Africa, Europe and the Americas. Boats from here carried  cotton, tea, ivory and (sadly) slaves around the world. 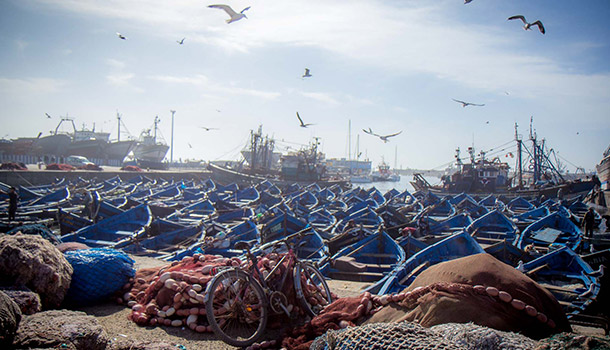 These days the port is still busy but in a different way. It’s become a hub for fishermen and  their boats fill the water when they’re not out at work. Most of them are painted blue and,  when they’re all gathered together, they look like the sea themselves. In Essaouira’s port, I  notice that even the fences are painted blue, as are the cabins on the dock, and even many  of the nets thrown on the ground.
Chefchaouen 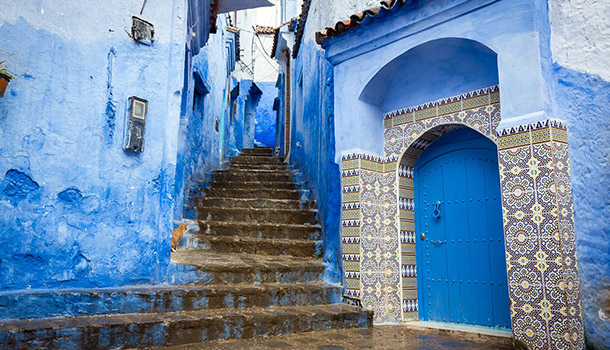 If you’re looking for blue, you’ll certainly find it in the old town of Chefchaouen up in the hills  of the north of Morocco. The whole town centre has been painted blue ­ the houses, the  walls, even the public buildings. When you wander through the small carless streets, it  almost feels like you’re underwater. The different shades of blue glimmer as you turn around  corners. 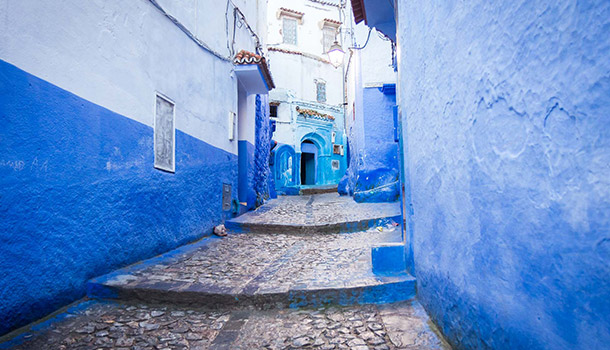 Nobody knows for sure why people started painting the city blue so many years ago. One  theory is that the colour distracts mosquitos. But a more popular story is that it’s supposed to  be symbolic of the sky and the heavens. It does feel a bit spiritual in Chefchaouen and the  quiet pace of life is a nice change from the more popular hectic hotspots.
The souks of Marrakech

Even in the big crazy cities, you can find blue. The old medina of Marrakech, for example, is  a maze of noises and smells. Vendors shout out at you, food is cooked on small stoves on  the street, donkeys brush past with goods on their backs. In the crooked alleyways there are  often just glimpses of sunlight.
The markets here give me a taste of blue in the wares that are on display. The plates  hanging at the front of shops (handmade, I am assured) beam with colour. The scarves on  racks are like a rainbow. And then there are the lamps. A bright blue one takes my interest  for a second, long enough for the shop’s owner to start haggling with me.
Atlas studios 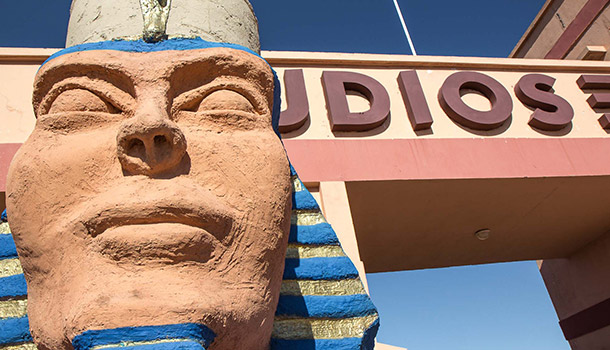 Out in the desert, a few hours drive over the Atlas Mountains from Marrakech, I come across  a rather unexpected site. It’s called Atlas Studios and it’s been the setting for dozens of  movies and television shows ­ epics like Lawrence of Arabia, Gladiator, Cleopatra and even  a Bond classic, The Living Daylights.
The studio was established here because the light was perfect for filming and there was  plenty of space to build large sets. Many of them look like the desert or old Roman cities but  there is also plenty of blue. You notice it most on the decorations of the buildings that are  designed to look like Ancient Egypt.
El Jadida 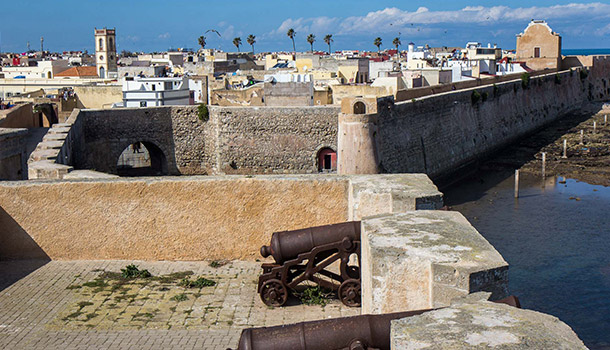 Although Morocco is most famous for its deserts, it is also has a stunning coastline and this  is where I find the bright blue of the sea. There are a few good places to see along the coast  but one of the most interesting ones is El Jadida, about 100 kilometres south of Casablanca.  It’s an old fortified town that was built in the 16th century by the Portuguese.
The medina is quite small and doesn’t take too long to walk through but it’s full of history. My  favourite story is about when the Portuguese were forced to hand it over to the Moroccans in  1769 as part of a peace treaty. The Portuguese were forced to leave through the gate that  led out to sea and, in retaliation, they left mines at the main entrance which exploded when  the locals tried to come in.
Volubulis 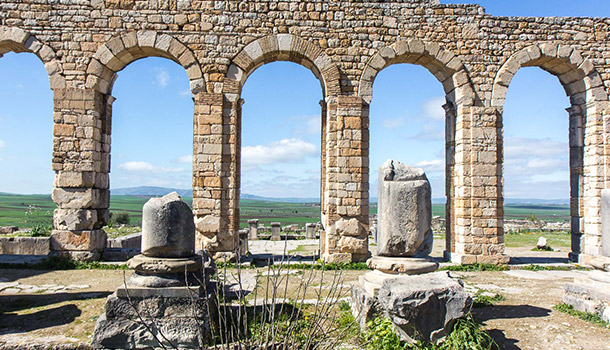 Finally, it would be remiss of me not to mention the sky in Morocco which is the most  obvious blue you see every day. The country has fantastic weather and rainy periods are  rare. In the cities, it can sometimes be hard to really appreciate the sky because of all the  buildings and development. It’s when I’m visiting Volubulis that I really take notice properly.
Volubulis was a Roman outpost built in the 1st century AD. It was on the extremity of the  Roman Empire and was used mainly as a farming community because of the fertile land. It  grew to about 40 hectares in size and you can walk around the area today and see the ruins.  What I love most about it is the way the columns and arches still rise up from the ground and  the stone contrasts against the sky’s blue. It’s a wonderful symbol of the colours of Morocco  that I’ve found here.