Swimming in a Big Hole: The Ik Kil Cenote of Yucatan, Mexico 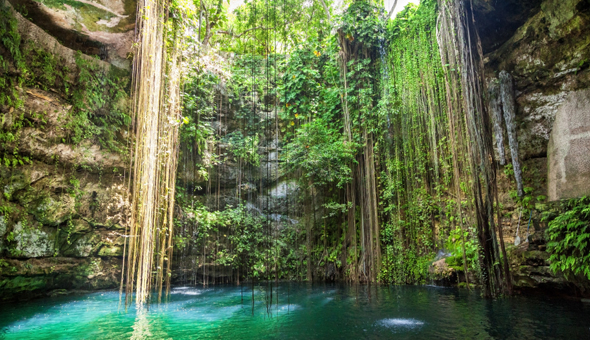 If you wish to see the swimming hole to beat all swimming holes you need to head about 190 Kilometers (120 miles) north and west of the world famous resort town of Cancun, Mexico to the Ik Kil Cenote.
What is a Cenote?
Pronounced “Z- not” by the ancient Mayans according to our guide but pronounced today as “C-note-a” by most everyone else, cenotes are a must stop on any vacation to the Yucatan. There are no surface rivers in the Yucatan Peninsula of Mexico. All rivers are underground. A cenote is a spot where the limestone has collapsed into this underground water system. Usually the roof has collapsed to create an opening and one heck of a swimming hole. Some access large caverns that are suitable for scuba diving while others are more suited as excellent swimming holes. There are an estimated 7,000 cenotes in the Yucatan to choose from with Ik Kil being recognized as one of the most beautiful.
Size is Everything
At 26 meters (85 Ft) below the surface, Ik Kil is one big hole in the ground. The water surface with a diameter of 200ft is so deep, 40 meters (130ft) that no one has ever hit their head on the bottom and diving is allowed.
Paired with Chichen Itza
A lot of tours booked from Cancun and Playa De Carmen to the ancient city of Chichen Itza include Ik Kil in their tour. Located just 3 Kilometers (2.6 Miles) from Chichen Itza this is a refreshing stop after a hot day at the pyramid.
Have a Bite
Besides being just about the most beautiful swimming hole in the world, Ik Kil is a popular spot because of their facilities. You can have a delicious buffet lunch, which is usually included in your tour, then move to the changing rooms with lockers to store your clothes. Then take a quick shower to get all that greasy sunscreen and sweat off and you’re ready for your dip.
Access
This big hole is 85 feet below ground level so you have to get there somehow. A circular staircase has been carved out of the limestone making for an easy walk down to the water. There are access windows carved out in two spots on the way down affording great views for pictures.
Cold, Cool Water
Cenotes in the Yucatan are mostly fresh water though some have salt water and some a mixture of both. Ik Kil is refreshingly fresh and cold, cold, cold. After spending a hot and humid day at the Chichen Itza archeological site, the water is just what you need. Black Catfish swim here but no worries; they don’t bite and just add to the mystique.
The View
The vines that hang from the opening down 85 ft. to the surface of the water carry little drops of water creating mini-waterfalls. There is water coming down one side making a waterfall for dipping your head under. Floating on your back gives a great shot of the opening above with blue sky surrounded by cascading vines.
It’s Sacred
The Mayan considered these cenotes to be sacred places; Cenote means “Sacred Well” in their language. Human sacrifices were performed at the Cenote Sagrado at nearby Chichen Itza and hundreds of sets of bones were discovered in the bottom of that Cenote. Ik Kil was more for sacred rituals and there were no known sacrifices performed there.
Take the Jump
There are platforms carved out of the limestone for jumping and diving so go for it: you’re definitely not going to hit bottom. Get there in the morning or early afternoon before the tour buses show up and enjoy this peaceful, refreshing and relaxing stop on your tour.
While you’re having fun in Cancun, remember you’re only going to spoil your holiday without proper travelling gear. Take a look at these travel gears to help prevent theft and secure your trip to Mexico.