The Gastronome’s Guide To Florence 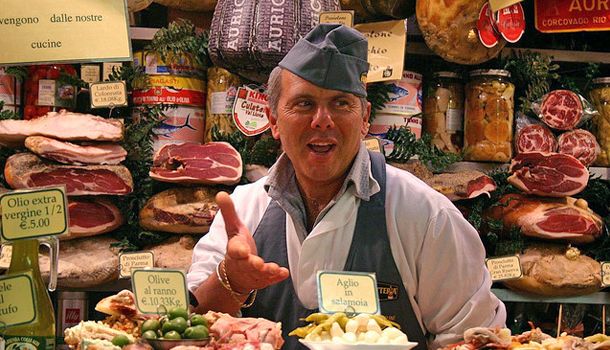 What do you think about when you think about Florence?
Red terracotta roofs spread across the Renaissance city, under the rolling green Tuscan hills. The Ponte Vecchio gracefully arched across the Arno, gleaming with the artisan jewelry of their expert craftsmen. Michelangelo’s David, forever immortalized in his triumphant pose; Botticelli’s Venus, as vibrant and beautiful as the day she first took life on the canvas.
Food. Dark crimson Chianti poured from the bottle wrapped in a wicker basket weave. Flaky country bread rubbed with garlic and drowning in emerald green olive oil. Thick, rare Bistecca Fiorentina, so iconic that the Florentines held a mock funeral for their beloved steak when the mad cow scare briefly banned it.
The Florentines are proud of their simplicity. They believe that if you give them a single tomato, they will move the world. Tuscan cuisine is about making the most with the least. Each flavor should be distinct, not masked by one another. Bruschetta(pronounced Brew-ske-tta), for example, is comprised of thin, crusty slices of unsalted country bread, chopped tomatoes, garlic, basil, and olive oil. The sensation should be one of different textures and tastes: The dry crunchiness of the bread, the delicate sugariness of the tomatoes, the sharp kick of the garlic, and the sweetness of the olive oil. Each gusto is defined individually, letting the ingredients speak for themselves rather than drowning in heavy sauces.
This culinary journey starts at the Mercato di San Lorenzo, the covered market, only blocks from Brunelleschi’s domed cathedral. On any given day, the mercato is alive with the energy of vendors, shoppers, fish mongers, butchers, cheesemakers, and farmers, all with the same thought: cos’è buono oggi?What is fresh today? The market is the center of Tuscan specialties. Cannellini beans, the lifeblood of Tuscan cuisine be it summer or winter, sweet red onions, olive oil, woodsy, mushrooms and fragile truffles from the forested hills.
The Florentine kitchen has its roots in humble beginnings. While Florence was once one of the most powerful ruling cities in Europe, its working class used only what they had available, leaving no ingredient to waste. Even stale bread, left to become stiff and dry, drizzled liberally in olive oil, mixed with beans, tomatoes, onion, kale, and soaked in a vegetable broth to become a thick soup called ribollita. In the summer, bread cubes drown in balsamic vinegar, then toss with onions, cucumbers, and tomatoes in a salad known as panzanella.
The Florentines are proud of their produce, but ask the butcher what he caught recently and he’ll excitedly tell you about his latest caccia, the hunt. It’s impossible to speak about Florentine cuisine without la bistecca, the steak. The beef, a T-Bone sourced from the Chianina or Marremma breeds, is flame grilled on an open fire and flavored simply: ubiquitous olive oil, garlic, salt, pepper, and rosemary. Anything else is a disgrazia, an absolute disgrace. The steak is served rare and almost never with a contorno, a side dish.
The Florentines also love cinghiale, wild boar and pheasant, served with drizzled beans and garlic-rubbed toasted bread, however, any would gladly tell you about tripe, or la trippa, (tree-pah)  the beloved lunch of the working man. The meat from a cow’s lining is served cold with tomatoes and salad, or grilled into a sandwich. Often, the tripe is presented with other salumi, various salamis and thin meats, including the much-loved lardo di Colonnata, thin slices of cured fat and a staple of the Tuscan table.
As dinner begins to wind down, the table is awash with crumbs, red stains, and golden oily patches, dessert includes a glass of sweet vin santo, a sherry-like wine made from straw-dried grapes served with almond cantucci from nearby Prato. The meal ends with a bowl of frutti di bosco, fresh forest berries served with yogurt or glazed with red wine and sugar.
Back at the mercato, it’s nearly lunchtime and the morning horde of tourists and locals salute their favorite vendors and leave to prepare the weekly meals. Gallons of olive oil will pour on prized produce, wine glasses will fill, the favorite cuts of beef and pork will grill to perfection, and recipes passed down over generations find their way to street carts and homes. The Florentine kitchen celebrating of simplicity in flavor and enjoying each morsel and ingredient for its individuality.
Buon Appetito.