The Medina of Essaouira

Many of the cities in Morocco have a medina (old town) that are worth getting lost in, but there is something special about the coastal town of Essaouira. Not only was it named a UNESCO World Heritage site for its beauty and rich history, but the town is literally named “beautifully designed” because it is one medina that you are a bit less likely to get lost in. Here are some suggestions on how to get around in the Medina of Essaouira and what you should see. 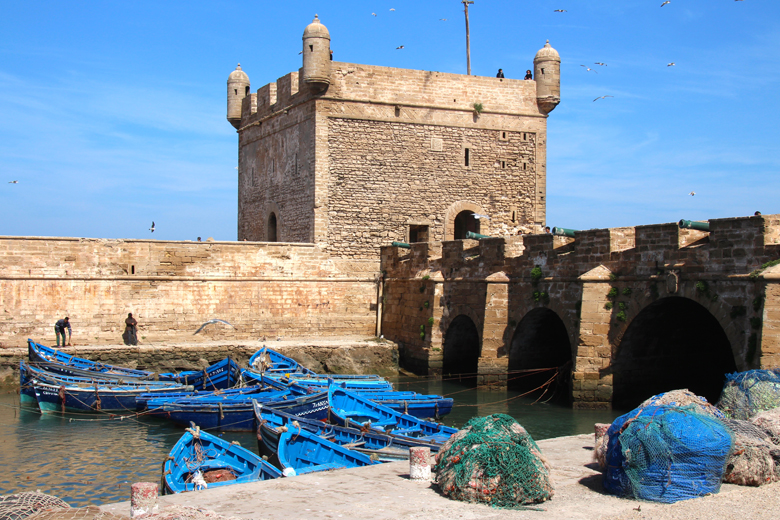 A Walking City
If you are staying in the medina, the first thing you should know is that you won’t be driving or taking a taxi up to your hotel. The old city is a pedestrian area. Your taxi will drop you off at one of the 4 city gates and you can either shlep your own luggage or pay .5 DM (50 cents) to one of the men near the gate with a wheeled cart for the service of transporting your bags.
The city has a long center street (which changes names 4 times, each time it passes through another gate) which runs from El Menzeh Gate near the port to the Doukala Gate near the new town. Just outside El Menzeh Gate and to your left as you face the city is the city’s main plaza where events like concerts are staged. Behind you is the colorful port full of blue painted fishing boats and the two towers built by the Portuguese that protected the harbor from pirates but seem to offer no protection from tourists.
Old City Walls
The medina is surrounded by the old walls of the city. One of the best places to explore the walls is on the Atlantic side of the city where old 18th century cannons still point out to sea from the battlements. To et to this section of the wall from El Menzeh walk straight down the main street past the clock tower to the first of the inner gateways and turn left on a street that will lead all the way to the wall. 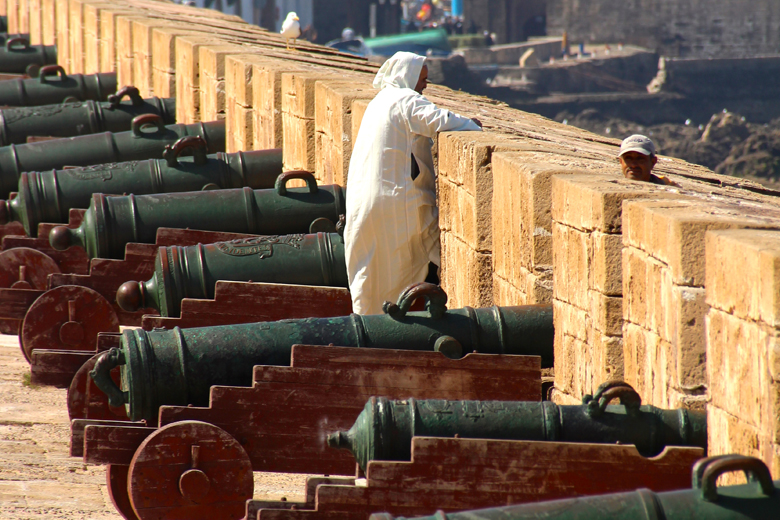 Craftsmen
The city is filled with hand crafts, shops selling jewelry, women’s cooperatives selling argan oil as well as some shops selling products from the indigenous people of China. One of the most beautiful of the crafts of Morocco and of Essaouira is inlaid wooden objects and furniture. To see both craftsman working at this ancient trade or to buy their wares return from the wall the way you came but turn left at the “major” street before the main thoroughfare. This street is Avenue Sidi Mohammed Ben Abdullah. Pass 6 small alleys on your right until you see the green crescent that marks a Moroccan pharmacy. Just behind the pharmacy you will find a shop creating and selling beautiful wooden objects. Be aware that the most expensive items in the shop will sell for more than a thousand dollars. 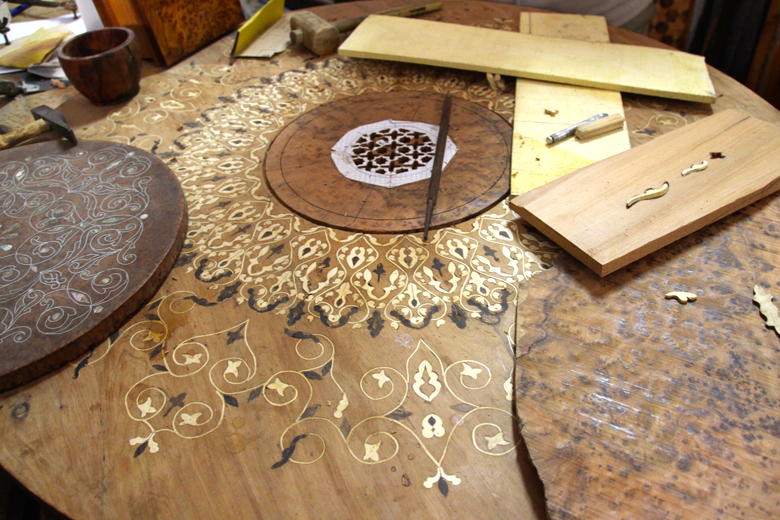 Markets
Continue on the way that you came to the pharmacy and make your first right to return to the main street. Turn left through on of the gates. Midway between this gate and the next you will see an opening at your left and your right.
On your right is the old grain market. Note how the stones in the ground are raised up. In muslim culture it is considered wrong to step on grain on the ground as it is a gift from God. This idea with these raised stones is that any fallen kernels would fall in the cracks between these raised stones and keep you from accidentally stepping on them. Before it was a grain market it was a caravan serai, basically a hotel for caravan camels. These days it holds a few places to sit and have coffee.
On your left is the spice market where you can find cooking spices but you can also find the purple dye from the murex (tropical sea snails) that originally attracted Phoenician and later Roman traders to these shores.
In front of you past the next gate you can find the market where the local Moroccans shop for local produce and other products. Behind the shops with piles of olives on the left hand side you can find back alleys filled with produce, butcher shops and live chickens. Good luck trying to get a live chicken through airport security. 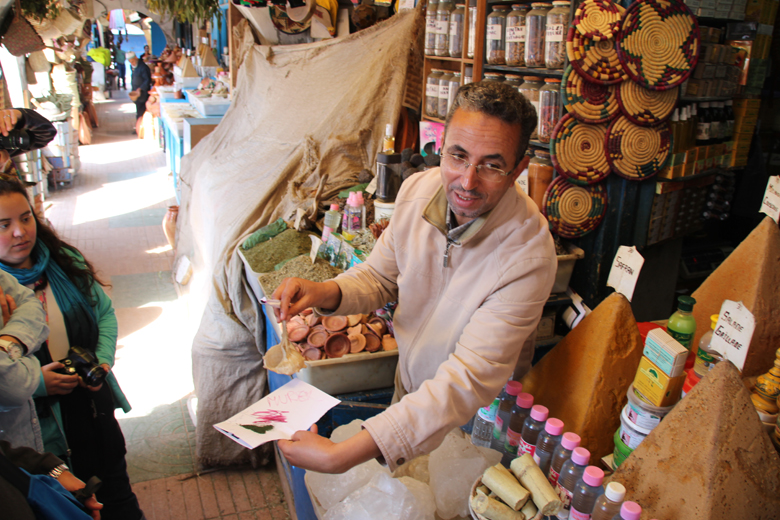 Back Alleys
To either side of the main street back alleys entice you to wander. Beautiful old wooden doors, kids playing soccer, laundry drying from lines attached to medieval walls all await you.
The back alleys behind the spice market still have abandoned houses from the old Jewish quarter. At one time there were more Jews in the city than muslims until the early 1900 when most of the trader families moved to Casablanca as it became the main port of the country instead of Essaouira. Later most of these same families moved to the newly founded state of Israel. Look for 6 pointed stars of David above the door frames instead of 5 pointed stars that remind people of the 5 pillars of islam. 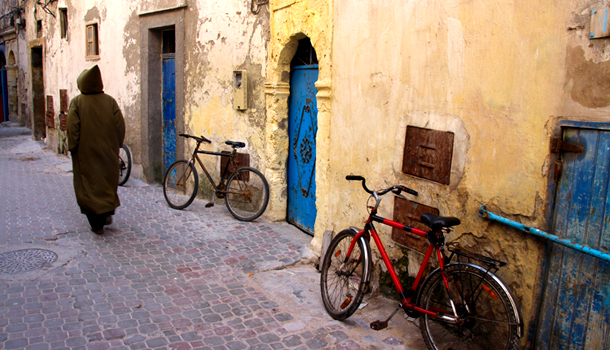 Crime
Unlike the medina in nearby Merracesh, walking around Essaouira you will probably not run into pick pockets, but we were given even more peace of mind as my wife was carrying her Slingsafe 250 GII anti-theft handbag. The bag is not only big enough to carry her water bottle, money and passport, but the security hook on the zipper and the slash resistant materials help protect from pickpockets and purse slashers. 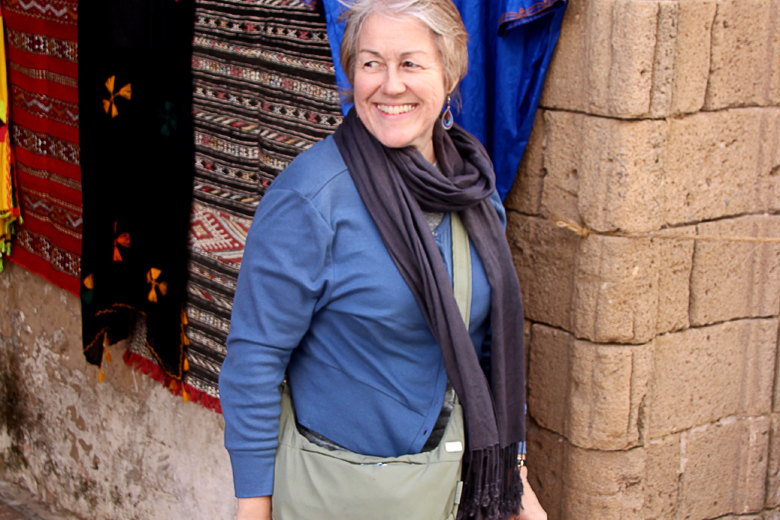