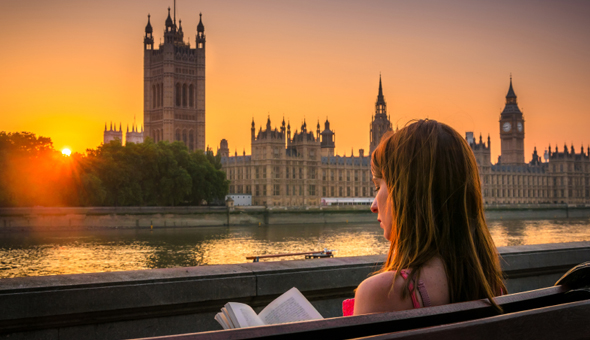 Do you love getting lost in a good book? If so, get lost in a literary wonder as you wander the world’s best book cities.
London, England
London, the book capital of the world, is home to some of history’s most notable writers and characters. Take a Dickens or Shakespeare literary tour, or visit the British Library—which has stock of some 14 million books. Take a stroll through one of hundreds of independent bookshops located within city limits.
Edinburgh, Scotland
Explore the heart of Scotland’s imagination through Sir Walter Scott, Robert Burns, Robert Louis Stevenson, J.M. Barrie, and Sir Arthur Conan Doyle. Tucked away in the Lady Stairs Close is Edinburgh’s Writer’s Museum. Visitors can take literary and ghost tours and discover the wonders and past lives of these popular authors. Edinburgh was UNESCO’s first City of Literature in 2004.
Dublin, Ireland
In 2010, UNESCO labeled Dublin as a City of Literature. This literary mecca is home to Joyce, Yeats, Shaw, and Beckett. Dublin has the most literary Nobel Peace Prize awardees than any other city in the world. While in Dublin visit the Dublin Writer’s Museum and National Print Museum.
Paris, France
Parisian cafes are the most quintessential backdrops for some of the best stories ever created. Read about the quaint and idyllic café life in the works of expat writers such as Henry Miller and Gertrude Stein. Of course French literates such as Balzac, Verne, and Voltaire’s contribute to the imagination of the traditional Parisian life. Escape the cafes and visit the popular Shakespeare and Company bookshop for a literary retreat.
Melbourne, Australia
Melbourne is another UNESCO City of Literature. Appointed in 2008, the spirit of Melbourne is in its stories. Publishing companies including a large number of independent and small book publishers supported authors and its historic stories. Year-round reader and writer events, conferences and festivals make way to this city.
Reykjavik, Iceland
Iceland is not just for nature lovers, but book lovers too! Throughout the years, locals have landmarked Iceland not only as a storyline’s backdrop, but is home to the most writers per capita. The city supports its collaborative projects and is most known for its medieval literature, the Sagas, the Eddas, and the Book of Icelanders.
Norwich, England
Norwich has been a literary city for over 900 years. As a UNESCO City of Literature, Norwich is home to the first book published by a woman, Julian of Norwich, in 1395. Norwich was the first to implement the Public Library Act in 1850 and contains five percent of the UK’s independent publishing sector. The University of Anglia offered the UK’s first Master of Arts, the Creative Writing program, graduating book prizewinners such as Ian McEwan, Anne Enright, and Kazuo Ishiguro.