Ever heard of Njerep? What about Liki? Chances are slim because they’re 2 of the rarest languages out there. According to the UN, there are approximately 6,000 languages that risk becoming extinct, which is tragic in and of itself. In response, they have created the Endangered Language Programme, meant to support the preservation of these languages, with the intention of never losing them. Curious to find out a bit more about these mysterious tongues? Check out our list of some of the rarest languages still spoken today. 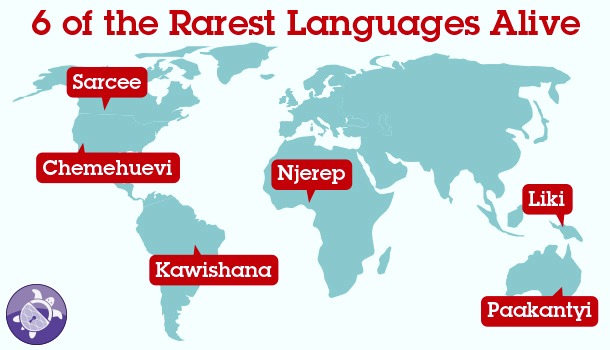 Even if you happen to travel to places where it’s a bit easier to communicate, reporting your passport or valuables stolen is never easy. Protect what’s valuable for a fun-filled trip with cut resistant and lockable Pacsafe backpack, crossbody, laptop bags and many more styles available here. SHOP NOW

Having already become extinct in one country (Cameroon), Njerep, a Bantoid language, is spoken in Nigeria by only 4 individuals. According to reports from anthropologists, the youngest person who speaks the language is 60, meaning that the chances of Njerep surviving beyond this last generation are pretty slim.

Spoken near the Japura River in Brazil, Kawishana (Kaixana) was once a popular language utilized by many. The numbers began dwindling, eventually dropping down to 200. Now, there remains only one documented person still able to speak the language.

This Australian Aboriginal language is still spoken in regions alongside the Darling River, but only by a few people. Reports vary, claiming that anywhere from 22 to 2 individuals are able to speak Paakyanti—but either way, it’s hard to argue that this language is on the verge of extinction. In an effort to avoid this fate, some schools have begun programs to attempt to reintroduce Paakantyi to a new generation.

The select few able to speak Liki (as of 2007, between 5 and 11 remained) inhabit several islands in the Papua region off the coast of Indonesia. Liki was once far more commonly spoken, especially by indigenous church leaders. Today, the numbers have dropped and aren’t likely to increase any time soon.

Sarsi, related to the Navajo language spoken in the Southern United States, is spoken by the Canadian branch of the Tsuu T’ina tribe. Because the culture is based predominately on oral transmission and tradition, there are no written records (or writing system, for that matter) available, and because only 50 or so speakers remain, Sarsi faces almost certain extinction.

A Colorado River Numic language, Chemehuevi is verging on extinction and is now only spoken by a handful of people in the Midwestern United States. Having been studied rather extensively by linguist Margaret L. Press, the language has been preserved in the form of field notes and recordings but is still likely to die out.