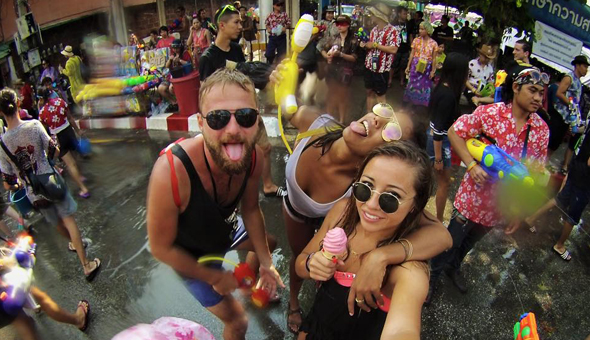 The Thai people know how to throw a killer New Year’s celebration. Forget the sequins, ball drops and champagne—why not just shut down businesses and have a nationwide water fight for three days instead? That’s what I’m talking about.

The Thai New Year, Songkran, is held every April 13-15 and means to “pass” or “move on.” During Songkran, the Thai people take time to visit family and honor their elders. Traditionally, this is done by sprinkling scented water to pay respect and bring good fortune. But nowadays, Songkran has become famous worldwide, with tourists flocking to Thailand for the wet festivities.

But, the water war is not for the weak hearted—or those who like to be on a cell phone 24/7. Here are 6 tips for surviving Songkran while having a blast.
First, let me paint a picture for you…
The entire country celebrates Songkran, but Chiang Mai, Bangkok, Pattaya and Phuket are popular destinations for getting rowdy and packed with people. Once you arrive, just know that if you are out in the streets, you are not going to stay dry. The locals are well prepared, lining the sides of streets and cruising in the back of trucks with water guns, ice cold buckets and hoses. Even if you beg and plead, you will not be spared. No one cares that you took an hour to put makeup on or do your hair. No cares that you are older or younger, and NO ONE cares that you have electronics on you. To everyone else, that is your mistake, and the more you resist getting wet, the more of a target you become.
Speaking of electronics…
Don’t even risk it. Come on, you can do without Facebook for a bit, right? Your best bet is to leave it all at your hotel or hostel and take as little with you as possible. Water tight bags are a good idea, but I would only use it to carry money. Because, once again, you will be drenched as soon as you step out onto the street. Now if you have a waterproof camera on the other hand…now we’re talking!
Embrace the Cleansing
Some people go into Songkran accepting the fact that they will be a soggy mess for three days and there’s nothing you can do but grin and keep walking or join the drench-fest. But, then there are the sour pusses that make you wonder—why are you even here? Girls, I know it can be frustrating when you get all dolled up to go out and then you are hit in the face with a sharp blast of icy water, but just shrug and let it go. You will get hit from every angle at least 10-20 more times. You think you’re safe and decided to reach the night market by songthaew…think again. Open tuk tuks and songthaews are the ULTIMATE targets. And, some drivers will intentionally take you down streets with the most water action. What I’m trying to get across is that you will get wet no matter what! Don’t get angry or rage on a drunk person with a water gun. It’s Songkran—time to embrace the cleansing!
Drink Responsibly
Of course, alcohol will be widespread. As with any festival or party—please be responsible. Leave the motorbike keys at home and take a taxi or walk. There are so many parties and events going on all over, so walking is a great to take in the city and the local traditions. Traffic becomes nightmarish and dangerous during Songkran. Yes, it’s fun to soak people that are driving by, but spraying tuk tuk drivers and bikers in the face while they are operating vehicles in heavy traffic is not cool. Think before you act.
Drinking responsibly doesn’t just mean alcohol either. April in Thailand is HOT. It’s easy to get caught up in all the water gun fights and forget to stay hydrated. Keep bottled water with you at all times.
Shower, shower, shower
As if you couldn’t get any wetter—make sure to take a thorough shower at the end of each Songkran day. A lot of times, the water being thrown about comes from ponds, moats, hoses and other questionable water sources. Especially if you are a foreigner, this is water that our bodies are not used to. It isn’t uncommon for Songkran participants to come out of the three day binder with skin rashes, breakouts, and other bacterial infections. I thought it was a good idea to swim in the Chiang Mai moat during Songkran. Lo and behold, I had to get treatment for a parasite. Learn from my mistake, you don’t want a parasite living in your body.
It’s Not Just About Soaking People…
Remember, Songkran is deep rooted in Thai tradition and culture. Do some reading up on the festival beforehand and don’t just blindly go into it thinking it’s another party to get wasted and go bananas at. Talk to the locals, this is a special time for them. It’s a time of cleansing, honor and respect. Families close up shop and travel to their hometowns to be with the one’s they love and don’t get to see very often. Learn some history on the celebration and you will go into it with new knowledge and a fresh perspective.

Courtney Lambert
Courtney is a full-time writer covering soccer, travel and the outdoors. You can find her scouting out hole in the wall joints for the perfect carnitas taco, jumping in the ocean under the light of a full moon or exploring the beautiful Florida wilderness and documenting her adventures in her blog, www.localtravelgal.wordpress.com.