It's in the Bones: Kutna Hora's Ossuary near Prague 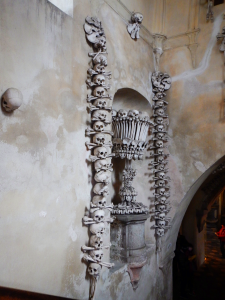 Nothing can prepare you for the sight you’ll encounter as you enter the Sedlec Ossuary (better known as “the bone church”) in the small city of Kutna Hora. Located 1.5 hours east of Prague, Kutna Hora is an unassuming town with a mining background and an astounding secret hiding inside a small Roman Catholic chapel.
The secret? The chapel contains the bones of an estimated 70,000 people, artistically arranged on the walls, the altar and the ceiling. There’s even a chandelier made entirely of human bones. The result is so outstanding that the ossary is now one of only 12 World Heritage Sites in the Czech Republic and one of the most visited sights in the country. 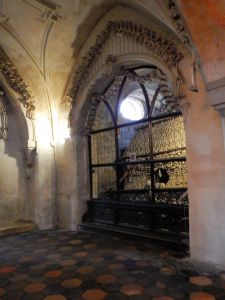 The origin of the bones is a little obscure. Many come from victims of the mid 14th century Black Death plague that devastated Europe. An estimated 80 to 200 million people died in Europe during the plague and bodies were buried anywhere they could be fit, which means most ended up in mass graves near churches or out in the fields. Other remains might have come from wars (especially the Hussite wars that rocked the Kingdom of Bohemia in the early to mid-1400s) and subsequent disasters that struck the area. Originally buried at the local cemetery, the bones were unearthed half a century later, during the construction of a nearby abbey.
It wasn’t until the early 1500s, however, that the construction of the ossary became a reality, under the guidance of a half-blind monk in charge of the chapel. 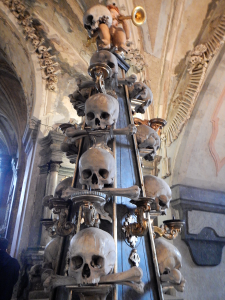 Construction and reordering of the bones didn’t stop until the 19th century. Much of the later work is attributed to František Rint of Česká Skalice, a woodcarver and carpenter employed by the Schwarzenberg family to transform the ossary. Several members of the aristocratic Schwarzenberg family were avid patrons of the arts, paying for reconstruction and artistic work in palaces, churches and castles around the country.
The result of Rint’s work is undeniable: a macabre display of death that attracts over 200,000 visitors from around the world every year. Of note are the four chandeliers and the Schwarzenberg family coat of arms, all built entirely of bones.