7 Things You Need to Know Before You Travel to Europe 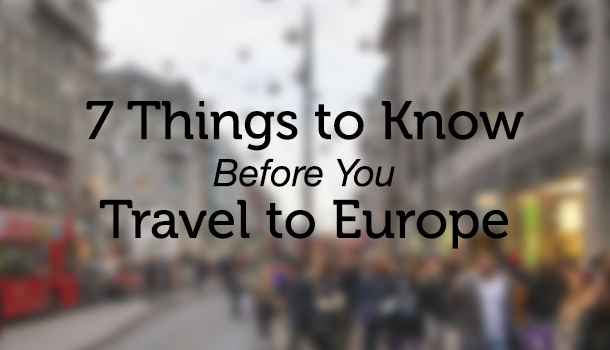 Do you plan on visiting Europe? Many perceive Europe as progressive and offering the best public transit in the world. Although true, many European countries still live an “old school” life where cash is king and shops are closed on Sundays. So this is what to know before you travel to Europe.
Bring Plenty of Cash
Many popular European countries use cash as the main form of payment. Credit cards are very popular in the United States and many people do not carry cash. The opposite applies in Europe. With the exceptions of the United Kingdom and small eastern cities that depend on tourism like Riga, Latvia, you will need cash to pay for everything. Many businesses in popular countries like Germany do not accept Visa or MasterCard, and only accept Deutsch bank cards or cash.
Validate Your Train or Bus Ticket
Most bus and train ticket stands require cash. Most do not accept bills higher than twenty Euros. Once you pay for your ticket, look to see if your ticket is stamped with the date and time. If not, look on the platform or inside the bus or train for a validation box. Ticket patrollers who do not see a time and date stamped are not lenient with unmarked tickets. They will issue a fine, which ranges between 40 to 100 Euro, depending on the city and country policies.
Travel Tuesday through Saturday
Most European countries still value “Sunday Rest Days.” Main shops close, with the exception of tourist areas or central train station bars and cafes. Depending on the country, some places close Sunday and Monday due to slow business.
Download a Translation App
English is the common language, but many Europeans do not speak English even in mainstream destinations. The French feel strongly about speaking French and many Spanish people do not speak English. Besides the United Kingdom, the Netherlands and Scandinavian countries speak the most English because of the abundance of non-translated movies and music that originated from the States and UK.
Water is Not Free
In America, water is served with every meal. In Europe, water is not free. Expect to pay between two to seven Euros per bottle of water. Also, many European restaurants serve carbonated water. It is not acceptable to bring your own beverage into the restaurant.
Bathrooms are Not Free
This is one of the most challenging aspects of Europe. Public and free toilets do not exist. From train station restrooms to streetside stalls, bathrooms charge between thirty Euro cents and one Euro to enter. Some restaurants also charge for the bathroom. This is seen especially at beach clubs where high traffic of toilet use is necessary.
Bring a Multi-Country Adapter and Converter
Although the United Kingdom is part of the European Union, they operate on their own electrical circuits. Purchase a multi-country adapter that is UK and EU compatible—and double check that it not only adapts to the plugins in that country, but also converts the electricity to work with their voltage. In the States the typical voltage is around 120V, but in most of Europe it’s around 220V—that means if you only change the plugin size but not the voltage, you’ll fry your electronics. Use this list to find the right voltage and plugin type for your destination.