A Beginner’s Guide to the Pacific Island Nations 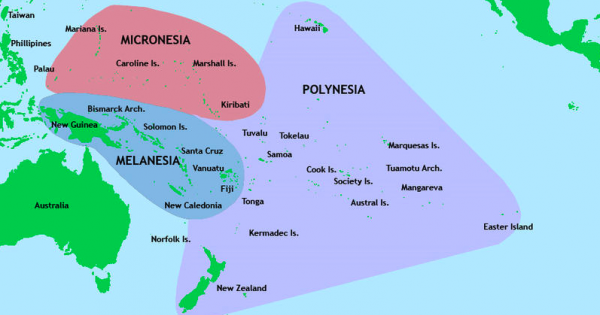 With tens of thousands of islands, islets and atolls scattered throughout the South Pacific, it’s easy to confuse the independent countries that govern them. Here’s a little background info to help you tell them apart.
Note:Only sovereign nations that lie entirely within at least one of the three major Pacific Island groups (Melanesia, Micronesia and Polynesia) are included on this list; territories, collectivities and other areas belonging to larger countries (such as Guam, Easter Island and New Caledonia) are not included.
Federated States of Micronesia
Capital:Palikir
Population:111,000
Number of Islands:607
Claim to Fame:Impressive distribution. Despite a total land area of less than 300 square miles, the islands occupy more than 1 million square miles of the Pacific Ocean. The ruins at Nan Madol, which date back more than 1,000 years, are also one of the region’s major tourist attractions.
Fiji
Capital:Suva
Population:849,000
Number of Islands:At least 332
Claim to Fame:Rugby. Fiji’s rugby following is well established and, despite the country’s relatively small population, the national team has participated in five of the seven Rugby World Cup tournaments. The Fijian islands also generate a fair amount of tourism (moreso than most small Pacific Island nations), largely due to the numerous, scuba-friendly soft coral reefs.
Kiribati
Capital:Tarawa
Population:103,500
Number of Islands:33
Claim to Fame:Christmas Island, which is technically an atoll (the world’s largest), comprises 70 percent of the country’s land area and has been a protected wildlife sanctuary since the 1970s. Movie buffs will also recognize Kiribati as the site of Gwyneth Paltrow’s Peace Corps service in the film Shallow Hal.
Marshall Islands
Capital:Majuro
Population:68,000
Number of Islands:More than 1,100
Claim to Fame:Nuclear testing, unfortunately. Bikini Atoll, today a World Heritage Site, was used by the U.S. government as a testing area for 23 nuclear devices between 1946 and 1958. Scores of inhabitants were exposed to radiation, and the atoll was considered uninhabitable for decades until scientific studies determined there was no further risk of nuclear fallout for those who wished to reside there.
Nauru
Capital:Yaren
Population:9,378
Number of Islands:1
Claim to Fame:Size… or lack thereof. At just over 8 square miles, Nauru is the world’s smallest republic, as well as the second least-populated nation in the world (only Vatican City has fewer citizens). On October 26, 1932, the country’s population reached 1,500. In honor of this milestone, Nauruans celebrate Angam Day, or the ‘Day of Fulfillment’, every year.
New Zealand
Capital:Wellington
Population:4.4 million
Number of Islands:33
Claim to Fame:Lord of the Rings. Just kidding… sort of. In addition to its eye-popping natural beauty, New Zealand is a venerable Mecca for all those who crave bungee jumping, white-water rafting, mountaineering, cycling and other sporty endeavors. And according to a recent article by Forbes, New Zealand is the ‘Friendliest Country in the World’.
Palau
Capital:Ngerulmud
Population:21,000
Number of Islands:More than 250
Claim to Fame:Environmentalism. Unlike many other Pacific Island nations (and likely due to its small population and low tourism rates), Palau is considered one of the most eco-friendly nations in the world. In 2005, President Tommy E. Remengesau, Jr. launched the Micronesia Challenge, a green initiative that seeks to conserve marine and forest habitats. The country is also home to the world’s first ‘shark sanctuary’, which allows visitors to swim up-close with one of the world’s most notorious predators.
Papua New Guinea
Capital:Port Moresby
Population:6.3 million
Number of Islands:151
Claim to Fame:Cultural diversity. PNG is home to hundreds of different indigenous groups, many of which live remotely and remain unseen by the rest of the world. More languages are spoken here than in any other country – more than 800 by last count, representing roughly 12 percent of the world’s total number. The country also ranked first on Lonely Planet’s list of top bird-watching destinations.
Samoa
Capital:Apia
Population:194,320
Number of Islands:10
Claim to Fame:Tattoos. Samoans have practiced tattooing for thousands of years, and the practice is intertwined with many cultural traditions and beliefs; Samoans, along with Maoris and Polynesians, are thought to be responsible for the infamously widespread ‘tribal tattoo’ designs. The nation was also made famous by Scottish author Robert Louis Stevenson (of Treasure Island fame), who spent his final years on the island of Upolo; the land he owned near the capital city of Apia has since been converted into a museum.
Solomon Islands
Capital:Honiara
Population:523,000
Number of Islands:Roughly 1,000
Claim to Fame:World War II. The island of Guadalcanal – the country’s largest – was the site of a bloody, six-month battle between Allied forces and Japanese troops. The campaign effectively halted Japanese expansion and served as a major turning point in the war. Author James Jones chronicled the campaign in his bestseller, The Thin Red Line, which was later adapted into an Oscar-nominated film starring Sean Penn.
Tonga
Capital:Nuku’alofa
Population:103,036
Number of Islands:176
Claim to Fame:The only constitutional monarchy in the South Pacific. Originally, Tongans served the Tu’I Tonga, or paramount chief, but this important figure was replaced by kings and queens in subsequent centuries and this political structure has sustained to the present day. One of the most revered Tongan leaders, Queen Salote, attended the coronation of Queen Elizabeth II in 1953.
Tuvalu
Capital:Funafuti
Population:10,544
Number of Islands:9
Claim to Fame:Isolation. Tuvalu is one of the most remote countries on Earth, and due to high airfare rates, only a few dozen tourists visit Tuvalu each year (most of whom don’t leave the capital city). However, the low turnout isn’t necessarily a bad thing; hard-to-reach islands like Nukufetau and Nukulaelae are considered some of the most pristine natural areas in the world.
Vanuatu
Capital:Port Vila
Population:224,600
Number of Islands:83
Claim to Fame:Pentecost Land Diving, a traditional practice among the N’gol tribe that has become quite popular with visiting spectators. Participants bind their feet with elastic vines and leap from tall treetops, and the vines stretch until the diver’s shoulders touch the soil. The activity is meant to demonstrate strength and courage, as well as bless the soil for the forthcoming yam harvest.
By Brad Nehring