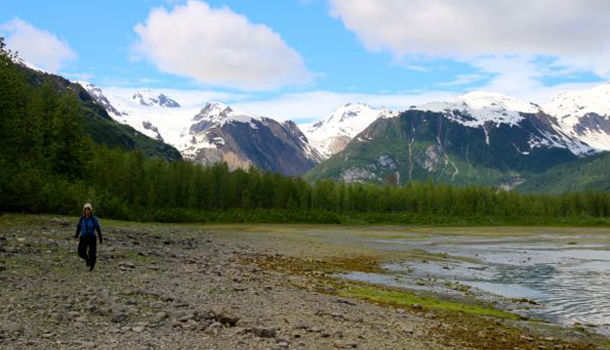 The idea of a bushwhack is to get off the trail and blaze a new trail. This is easy to do in many parts of Alaska as there are no trails in the first place.
Our guide told us that only 5-7% of the visitors to Glacier Bay National Park ever set foot on land. Most of those that do so land near the park headquarters where there are handy things like a visitor center and trails. We boarded a small skiff from our exploration craft (the Uncruise ship Safari Endeavor) and headed instead to the end of Geikie Inlet where there are no trails, buildings, signs, docks or gift shops. A handful of curious harbor seals seemed puzzled by the whole idea, as did at least one in our party of eleven.
The Vegetation
Like so many of the glaciers in Glacier Bay, the glacier that carved this bay is rapidly receding from the bay back into the ice fields of the Fairweather Mountains. The land that is uncovered by a receding glacier is not immediately fertile land, just sand and rock. One by one a series of plants take hold in a process known as plant succession. Lichens start breaking down the rock to form the first soil followed by plants like fireweed which fix nitrogen into the soil. Alder bushes follow the fireweed, but then make way to cottonwood trees. Eventually spruce trees crowd out the cottonwood and the area looks like the familiar forests of southeast Alaska. Geikie Inlet is still in the middle of that process so it is one of the few sites in the area with a cottonwood forrest.
If the fragrant cottonwood forests are the good news about Geikie Inlet, alder is the bad news. Low lying alder bushes make for an underbrush that really puts the whack in bushwhack. Pushing out from the beach we followed the shore of a river for a while and then pushed into the alder. Stepping over, crawling under or barreling through the brush, we made our way up the valley at a speed that reminded us why they measured this outing in hours not miles. 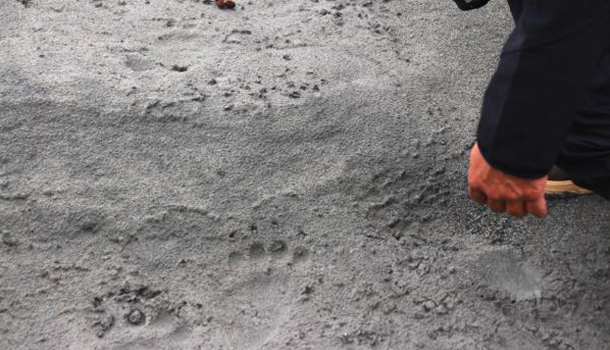 The Animals
The landscape was covered with fresh tracks of bears, moose, and coyotes. We were both really hoping to see some of the illusive wildlife, and really hoping not to see it unexpectedly and up close, as we came out of some stand of brush. We tried to make enough noise so as not to take some bear or moose by surprise. If we see a bear, don’t run—check. Gather around the guide because the bear would be more wary if he sees our numbers and and because the guide has the bear spray—check. If we see a moose, run—check. Get behind a tree big enough to slow down a moose—check. But what if we see both a bear and a moose?
6 hours later we were back at the same beach. We did not see a bear or a moose. For some it may have been a trip to nowhere to see nothing, but to me it was an adventure. And now there is one less unexplored bay in Alaska. 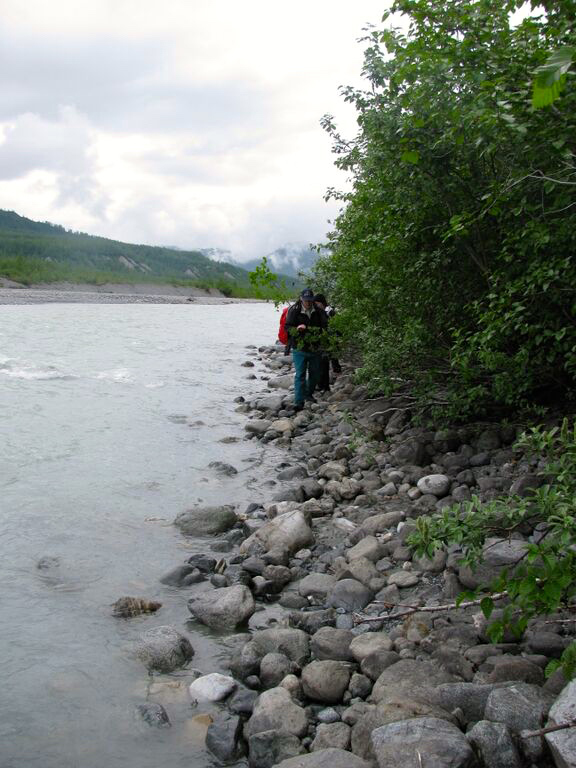 The Gear
Before our adventure, we had to get geared up.
Rubber boots and rain pants: between wading to shore, wading through the river and a few areas of BSM (boot sucking mud) rubber boots provided practical if not partially stylish footwear. Rain pants worn over the boots provided a few extra seconds before the boots filled with water in the deeper spots.
Bug spray, sun screen, hat: this is Alaska where bugs and rain may be more likely than sunburn but the day we went sunscreen and a hat were more appropriate for the weather. Make the hat a sturdy one that you won’t lose pushing through the brush.
Backpack: we brought a lunch and extra gear in a backpack. I used a Pacsafe Ultimatesafe 22L anti-theft backpack, figuring that a bag sturdy enough to be slash resistant would also be sturdy enough for Alaska branches and brambles. It was more than up to the task and remains unscathed by the experience. We didn’t get a chance to see how it would stand up to a bear, though.
Long sleeves and gloves: to protect you from the bushes, bugs and sun, this is a good place to either have a long sleeve shirt or a long sleeve jacket you can put on when you’re pushing through the underbrush. Some in our party also found gloves a great advantage.
Camera: If you can’t show pictures to your friends that document just how tough you are for going bushwhacking, then what would be the point? 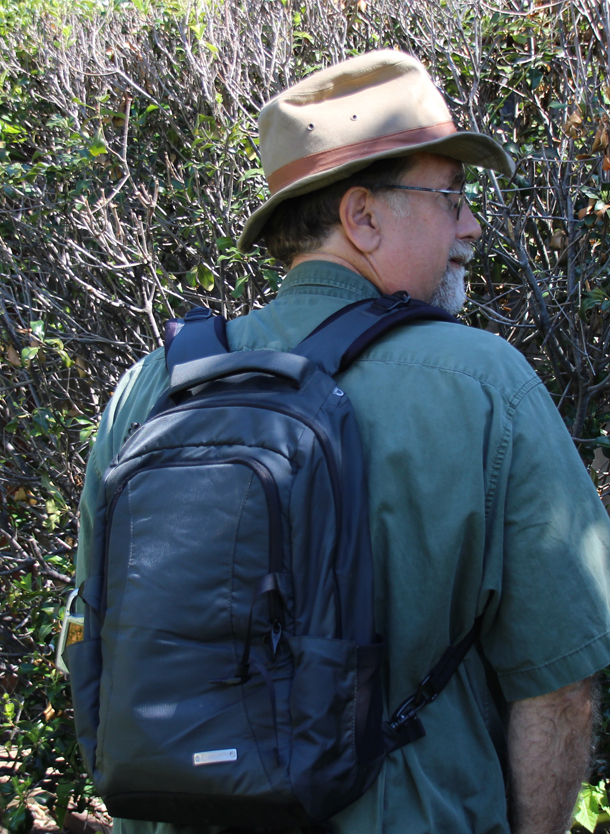