Father’s Day was established in the U.S. in the early 20th century but is now a worldwide event. Here is how some other parts of the world celebrate Dads.
A Shaky Start
The first observance of our day had a shaky start on July 5, 1908 in Fairmont, West Virginia. A woman named Grace Golden Clayton suggested it to her pastor to honor her father and all the others who had died in a recent mining disaster. The church honored her wishes but it was never officially recognized and was not celebrated again for many years. Then in 1910 Sonora Smart Dodd told her pastor in Spokane, Washington she wanted to celebrate Father’s Day after hearing a sermon about Mother’s Day (of course). Things fizzled until Dodd approached the Men’s Wear Retailers in the 1930s. Now that sales were involved, things started getting done.
Different Dates
While a lot of countries including the U.S now celebrate Father’s Day on the third Sunday in June, many other countries have their own dates for honoring their fathers. March 19 is considered St. Joseph’s Day in the Catholic faith and many countries recognize this day as well.
Other Ways to Celebrate
In Russia they’re honoring from a military angle, by celebrating Defender of the Fatherland Day with parades to honor the Russian Armed Forces.
Thailand honors fathers on the birthday of their King Bhumibol Adulyadej—I guess Father’s Day rolls off the tongue easier than King Bhumibol Adulyadej Day. The King gives a speech and dads receive the Canna flower which for some reason is considered having a masculine association.
Australians celebrate on the first Sunday of September, but that is also the first day of spring down under so there may be ulterior motives there.
Mexico Takes it to a New Level
Mexico takes this day a little more serious than the rest of the world. While they use the same day most of us use (the third Sunday in June), they have many more festivities like the Carrera del Día del Padre 21K (Father’s Day 21K Run) in Mexico City. While it’s not an official holiday, they do things up in a bigger way than most with gifts and celebrations including food and music. Maybe all you dads should consider your next vacation should be to Mexico, maybe around the third Sunday in June. 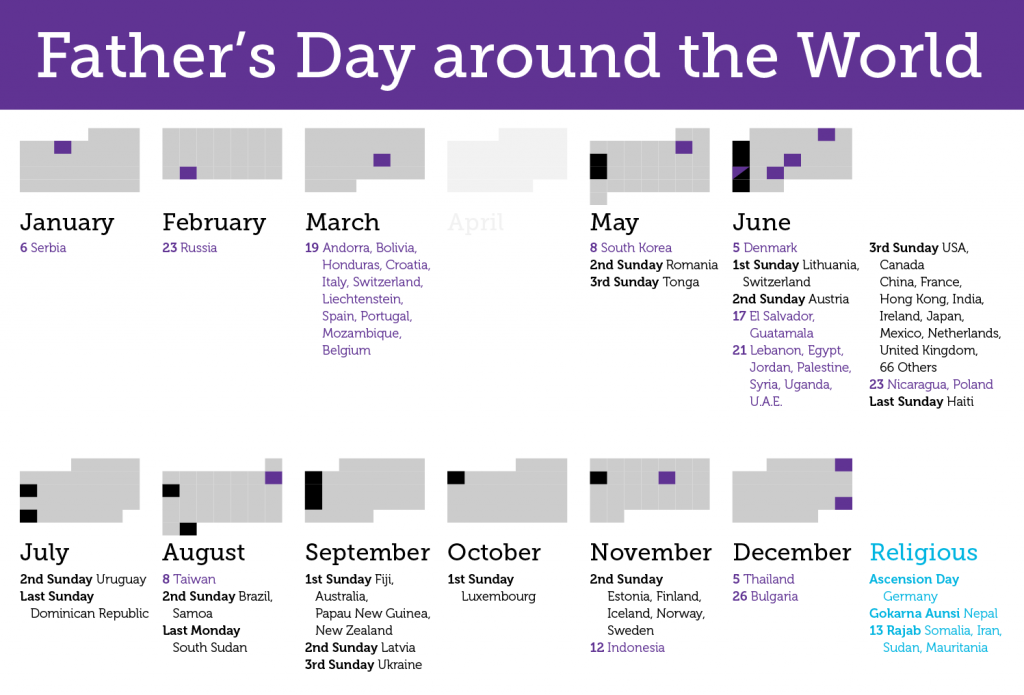