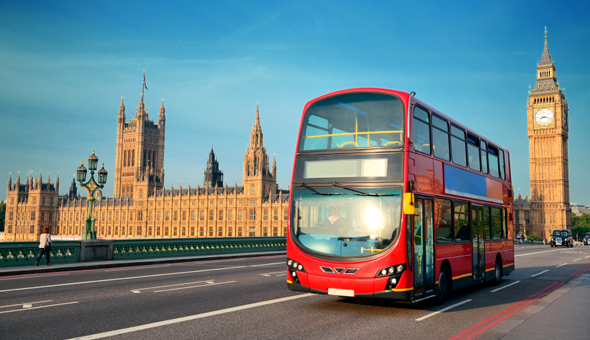 Do you want to travel Europe and save money? If so, transportation companies around the EU offer affordable bus, train and airfare tickets so you can see the best of Europe without blowing your budget. On your next European vacation, check out these options where tickets are as low as one British Pound.
Bus Services
Megabus
Megabus is a low-cost intercity bus service that operates around the EU, but with most routes available in the UK. In 2015, Megabus opened routes connecting the United Kingdom to France and Italy and also Germany to Spain and France. When traveling the UK, intercity bus tickets are sold for as low as 1 British Pound. During the weekday, travelers can pay as low as 4 British pounds for a one-way ticket from London to Edinburgh. Overnight services are available for longer trips.
Meinfernbus
If you want a low-cost bus service around Germany, Meinfernbus will be your best friend. In 2015, this company merged with Flixbus to offer more routes at an affordable price. Depending on the length of the route, tickets are as low as 5 Euros per seat. One of the best features is that travelers can book cheap rates on the same day of travel without last-minute markup fees. International routes to select cities such as Amsterdam and Prague are also available for purchase.
Air Services
Ryan Air
Yes, it is true; travelers can book tickets for as low as 8 Euros per seat. Ryan Air is a British-budget air operator that flies across the EU and to Morocco. It’s common to find fares that average between 15 to 40 Euros per seat, especially during low season. Ryan Air flies into major airports with the exception of several cities. Some airports are one to two hours away from the city’s center, so before booking check the airport and connecting bus services.
Easy Jet
Easy Jet is another low-cost airfare operator that flies to 30 countries and offers over 600 routes. Keep an eye on the website as select sales open up weekly. Take a look at the “year view” when researching a ticket to see the average cost. When booked in advance, flyers purchase tickets for as low as 14 British pounds. Make sure to read the back of the inflight magazine, which displays operating city’s train, bus, and taxi fares from the airport to city center.
Train Services
Deutsche Bahn
Train travel is not cheap, but Deutsch Bahn offers select routes within Germany and surrounding countries at an affordable rate. If you spend time in Germany, it is worth purchasing the Bahn-25 or Bahn-50 card, which deducts 25 or 50-percent off the ticket price. New bus and train routes have opened with fares as low as 19 Euros to travel from Berlin to Prague. Munich to Salzburg, Austria is as low as 7.50 Euros per one-way ticket. Deutsch Bahn offers routes that include train and bus travel.
Polrail Service
Polrail features domestic and international trains in and around Poland. When booked in advance, a Warsaw to Krakow ticket can cost as low as 61 Polish zloty or 13.50 Euros. A Warsaw to Berlin train can cost as low as 30 Euro per ticket. This is one of the cheapest options to travel surrounding Eastern European countries on a budget.
Ferry Services
Aferry
Aferry.co.uk is an online ferry service operator. Travelers can book any route throughout Europe and Russia and receive the best fares for several ferry companies. Look for the “best price” sticker and non-refundable tickets for the cheapest option. Ticket prices are cheaper on Aferry’s website compared to purchasing the ticket directly through the ferry line.