Chompin’ at the Bit for the Chinese New Year 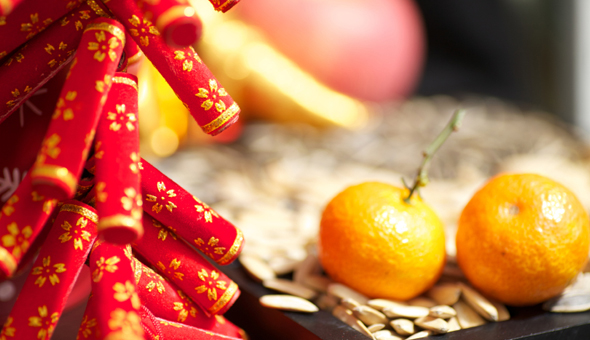 One of Oahu’s largest and liveliest celebrations of the year, Chinatown’s Chinese New Year festivities are ones for the books. Each annual celebration typically includes the crowning of a Narcissus Queen, a lion dance procession with firecrackers, a parade, and a two day street festival. Aligning itself with the beginning of our calendar year, Chinese New Year’s actual date varies each year, but always falls within the months of January or February.
Considered to be one of the most vital and fortuitous festivals, the Chinese New Year heralds the beginning of a new lunar year for all Oahu residents. But the fun and festivities are not just enjoyed by Hawaii’s islanders alone, the Chinese population (and their invited friends, family and Ohana) all across the globe come together to share in celebrating, much merry making, and welcoming in the new lunar cycle.
This year, the official 2015 Chinese New Year occurs on Thursday, February 19. And in Hawaii, the festivities of celebration present the perfect blend of excitement, joy and merry making coupled right alongside a rich history of ancient traditions. For Oahu residents, it’s a well-known fact that no one does Chinese New Year like Chinatown—an Oahu historical gem shrouded in ancient intrigue, mystery and an exotic appeal that is unrivaled by any other Hawaii locale.
Eclectic and vibrant, the area comes to life each year, embracing the unique and enigmatic spirit of the celebration that is Chinese New Year. Previous years (and according to tradition), visitors’ initial encounter with Chinatown will have them seeing red, literally, as the entire area is covered with hues of crimson fabric in order to pay homage to the hue of its historical origins.
In fact, as you make your way down the main festival thoroughfare of Maunakea Street, your eyes will alight on rapturous visions of red all around, from lanterns complete with scrawled inscriptions of good omens, to fellow revelers wearing red as well. The reasoning for such attire is that Chinese lore believes this hue to be auspicious and one that fosters fortune and good luck for those robed in its celebratory shade. Continuing the color scheme, celebrators will also send and receive monetary gifts among one another to mark the occasion—you guessed it—using enveloped resplendently red.
Continue on, and you will come across a plethora of other exciting offerings, including the festival’s famous Chinese New Year parade, complete with the beloved lion and dragon dance paired with the Chinese animal of that specific year alongside. Also a part of the parade are the afore mentioned Chinese good luck lanterns, magnificent musical performances and even captivating kung fu exhibitions!
And not to neglect the festival’s abundant food offerings, attendees can enjoy food stalls filled with traditional Chinese cuisine like Peking Duck, Nian Gao and more while celebrating. With events like this, every new year must be blessed.
by Andy Beth Miller