Europe’s Most Affordable and Most Expensive Cities 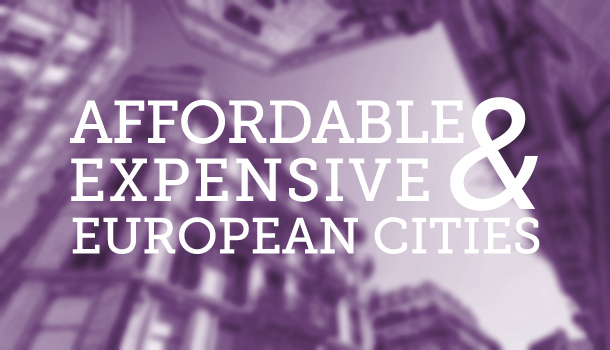 A common misconception is that Europe is an expensive continent to travel. Many top European destinations cost a pretty penny, but Europe also provides some of the most affordable cities in the world. The “Europe Backpacker Index for 2015” showcases the top 56 cities according to affordability. The index is based upon the US dollar exchange rate and the daily costs for each city. Daily costs include a good hostel, transportation, entertainment, meals and attractions. Below is the top 5 most affordable and expensive cities in Europe.
Most Affordable Cities

Bucharest, Romania
Daily Backpacker Index: $26.38 US dollars per day
Romania’s largest (and capital) city, Bucharest has been around since 500 BC; however, its well-documented history began in the 1400’s. In the early 1900’s, Bucharest earned its nickname, “Little Paris,” thanks to the Belle Époque (French for Beautiful Era) buildings. It may not be the prettiest city, but travellers on a budget will find plenty of reasons to visit. Popular attractions include Arch of Triumph, House of the Free Press, Royal Palace, and The Romanian Athenaeum.
Sofia, Bulgaria
Daily Backpacker Index: $27.27 US dollars per day
At 2,400 years old, affordable flights, attractions, and accommodations still make Sofia a destination for travellers from around the world to explore its medieval charm. A single ride of Sofia’s metro cost approximately .50€. Among the local attractions are architectural dreams such as the Alexander Nevski Cathedral, Ivan Vazov National Theatre, and National Palace of Culture.
Krakow, Poland
Daily Backpacker Index: $27.79 US dollars per day
Krakow is one of Eastern Europe’s best kept secrets, with a beauty, history, and charm combining to make it a desirable and affordable destination. The bustling central square flaunts horse and carriage rides which ride around 11th Century castles and historic churches. Krakow is well known for street-side cafes, jazz shows, cheap cherry vodka shots, and inexpensive pretzel-bread stalls. Travellers can upgrade to apartments-for-rent as low as $20 per night.
Belgrade, Serbia
While it may not be the most desirable European city, Belgarde offers plenty of cheap accommodations and entertainment. Travelers can find hostel beds for as low as $5 per night. Popular attractions include the Nikola Tesla Museum, Palace of Princess Ljubice and Eastern Orthodox churches.
Most Expensive