The most enjoyable aspects of fall travel isn’t just fewer crowds or lower prices, it’s also the beauty of the autumn season. What makes fall in Europe unique is the color of the leaves. You’ll see a varying range of yellow and rust hues, but little of the intense reds you’ll see in the United States. Scientists say there’s an evolutionary explanation for the phenomenon that has to do with insects.
But the colors are no less spectacular. In fact, it’s a unique experience—like seeing the southern hemisphere’s upside down night sky.
Many of the cities and areas that dress up nicely in fall colors also offer luxury hostel accommodations at bargain prices. By definition, posh hostels offer, in addition to communal sleeping quarters (dorm rooms), at least one dedicated private room, have front desk/reception (or concierge) and feature unique furniture, interesting architectural elements and classy interior design in the common areas and rooms. And they’re notable for having top-notch WiFi. Check into one of these five posh hostels and enjoy the autumn foliage
The Independente Hostel, Lisbon (Lisboa), Spain 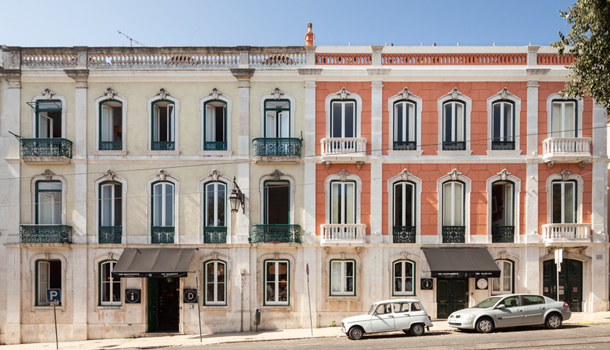 One of the best locales for budget-savvy travellers in Europe, Lisbon is gorgeous in the fall. As the temperatures drop from September’s average daily high of 81°F to 63°F in November, and the rain also picks up, the trees burst in gorgeous hues of yellow and orange. Take tram 28, a reproduction vintage car that has been traversing the streets of Lisbon since 1928, from Praça do Comércio (also known as Terreiro do Paço), an expansive waterfront square on the Tagus River, to the Lisbon hills via a steep maze of alleyways and mosaic-cobblestone streets past peeling walls etched with artful splashes of street art.
Lisbon currently has five hostels in the top 10 best “poshostels” list, according to crowd-sourced rankings. Located in a former Swiss Ambassador’s residence, The Independente features original architectural design elements and vintage design accents. Choose from 11 modern dorm rooms and four private suites. The hostel’s Decadente restaurant offers bargain prix fix lunches during the week and an expansive bargain buffet in the evening.
Prices from $11 a night for a dorm room to $101 for a private suite with a terrace balcony and river view.