Florence, Italy: 7 Reasons Why You Will Definitely Return 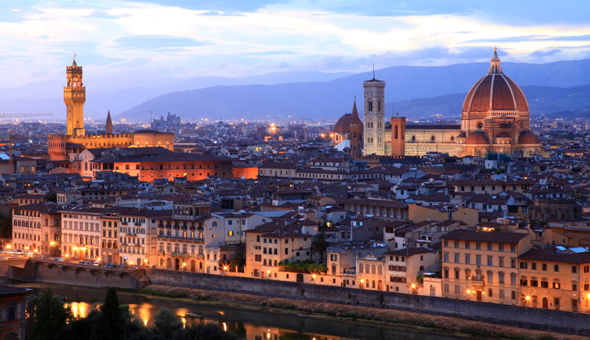 Located in the Tuscany region of Italy, Florence is one of the main, must-do stops on any tour of Italy. Florence is the home of the Renaissance; need I say more? Okay, Leonardo de Vinci, Michelangelo and Dante all called this home and could not stay away. Here are just six more reasons you will feel the same way.
The Piazzas
Piazzas in Italy are city squares where residents gather to mingle, meet and do business or just to hang out. Florence is dotted with great piazzas including the Piazza del Duomo, the Piazza della Repubblica and the Piazza San Lorenzo. The Piazza della Signora, one of my favorites, is one of the great gathering spots in the world. Whether you’re there for the people watching, the musicians playing for tips or the sculptures, you are sure to be entertained. The open-air Loggia della Signoria is full of museum quality sculptures including Cellini’s Perseus with the Head of Medusa and is even more breathtaking at night under the lights. Also bordering the piazza is the world renowned Uffizi Gallery, the Palazzo Vecchio with its tall, iconic tower and numerous ristorantes with patios for al-fresco drinks and dining.
The Bridge
San Francisco may have the Golden Gate and New York has the Brooklyn Bridge but the Ponte Vecchio stands out as one of a kind. Not nearly as big as the Golden Gate or Brooklyn Bridges this is a historical span that dates back to Roman Empire times. Though the whole structure you see today only dates back to 1565 it is the only bridge in Florence not destroyed in World War II by the Nazis. Some say Hitler saved it due to the priceless art in the Vasari corridor above the bridge that connects Palazzo Vecchio, the Uffizi and Pitti Palace. Today the shops in the bridge that spans the Arno River are occupied mainly by gold merchants and jewelry shops selling top-quality, hand crafted works that are one-of-a-kind.
The Museums
The Uffizi, one the most famous museums in the world, features pieces like The Birth of Venus, Primavera by Botticelli, The Adoration of the Magi by Leonardo da Vinci and The Holy Family by Michelangelo among many others. Florence is awash with museums with way too many to mention here. Others that stand out include: The San Marco, The Opera del Duomo and the Accademia Gallery which holds Michelangelo’s David.
The David
If you see only one sculpture in your life, make it the David. Housed in its own museum, The Accademia Gallery, this is not only one of the most iconic pieces of art but is spellbinding to see. The Accademia has several other pieces of the master’s work, some only partially finished, along with works of others, but The David is the centerpiece of the show. It was originally unveiled in 1504 in the Palazzo della Signoria but moved to its own site in the Galleria dell Accademia in 1873. The statue is spellbinding and you will swear you can see him breath or move. The veins in the hands, the musculature and just the sheer size are enough to make any trip here worthwhile.
The Food
After eating lasagna in Florence, eating at the Olive Garden or Macaroni Grill just won’t cut it anymore. The little ristorantes that dot the city center are worth the trip on their own. Small patios, some just big enough for one or two tables can be found on any side-street. The shops selling vegetables offer artichokes that approach the size of a basketball. Pizza shops have display cases street-side that will make your mouth water. The hills of Tuscany are productive with abundant products that will make your mouth water. Add in the wines available and dinner will never be the same.
The Shopping
Florence has been a center for fashion along with art for centuries. Some of the most famous and luxurious jewelry and leather work has come from here. From the gold smiths on the Ponte Vecchio Bridge to the family owned Peruzzi leather store in the center of town, the goods you get here can be one of a kind and the top quality available. Just as American restaurants featuring Italian food will never cut it for you again, the clothing choices in Florence will stand out and above anything you’ll find in the States. Also, since you’re a foreigner you are eligible for a 20% refund on the Value Added Tax if you spend more than about $200 (the amount changes so check) at any one time. Make sure you ask for the forms and show your passport.
The Vibe
Walking the streets, visiting the piazzas and dining in any ristorante of Florence can fill many nights with artistic, culinary and peaceful enjoyment. The city is basically an outdoor museum, filled with classic works of art, some right on any street corner or piazza and open to the air and public. Consequentially, the city is very safe. There are cameras and police or Carabinieri everywhere to guard these priceless attractions from graffiti or vandalism. Whether you’re strolling the back streets and alleyways or watching the sunset from a bridge over the Arno, you will feel safe, you will have a wonderful time and, odds are: you will return.