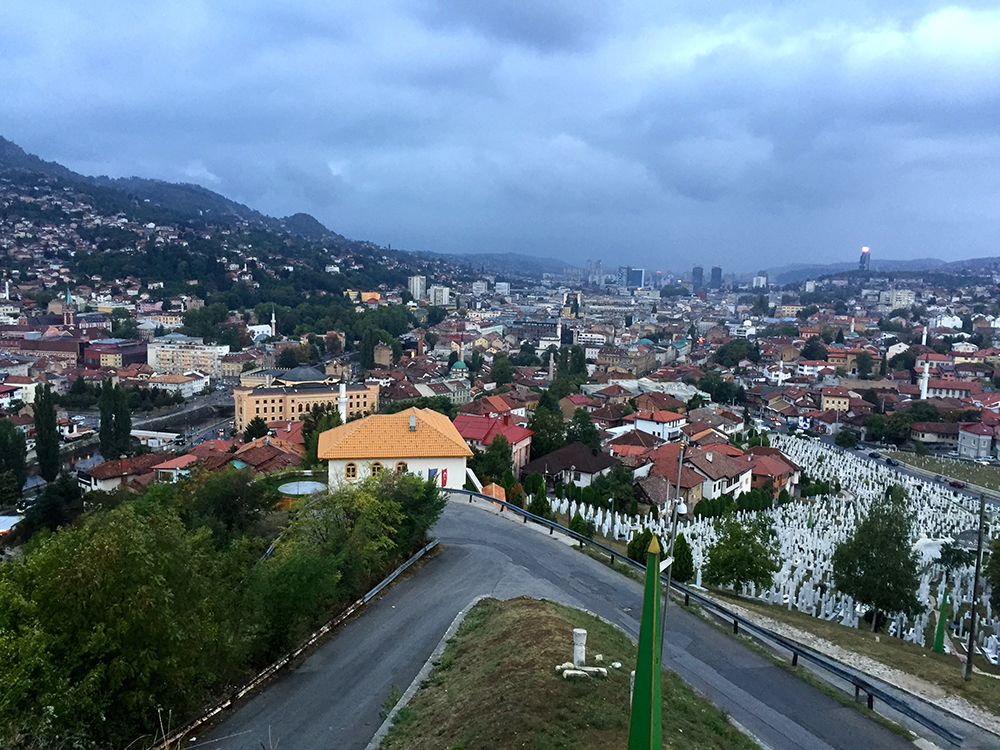 A funny thing happened to us on the way to our vacation in Croatia; we accidentally traveled to Bosnia. I don’t mean to say that we boarded the wrong plane or that there was a mixup at the border. We were flying on miles and there was no availability for travel to Dubrovnik, so we flew instead to Sarajevo instead…and loved it.
I am old enough to remember both when Sarajevo hosted the winter Olympics, but also to remember when the city was under siege for 1,425 days during the Bosnian War in the 1990s. But Sarajevo is back and ready to receive visitors, although it does not get as many as it deserves given its culture, history and food. Sarajevo is in a narrow valley between green hills which, now that they are no longer covered by Serbian tanks, give it a beautiful setting.
We went to Bosnia and Herzegovina somewhat accidentally, but you should go on purpose. We found a country that is beautiful, historic, affordable, and ready to receive visitors. 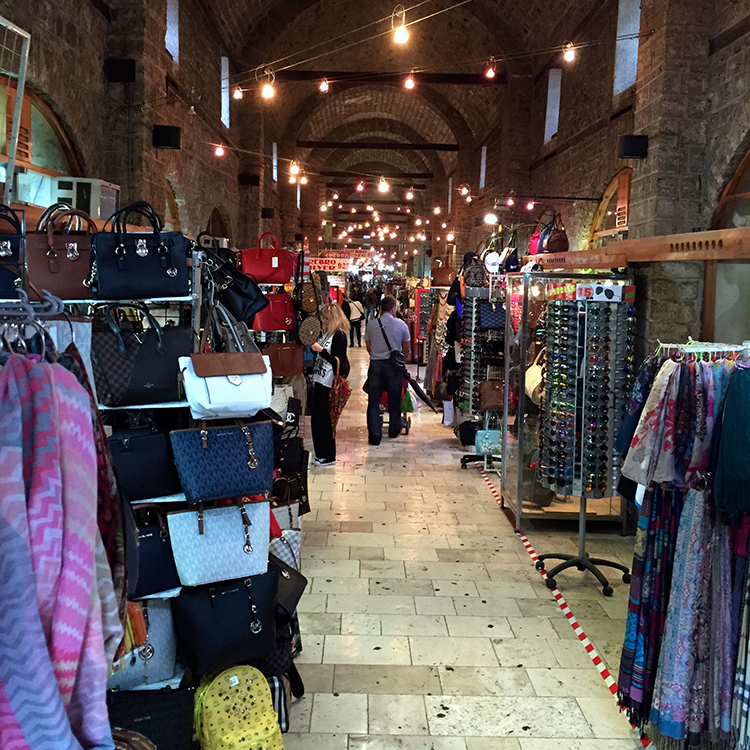 An Old Town Full of Surprises
We loved the old town. We shopped in the old city market. The old town had your usual collection of knock off handbags, t-shirts and souvenirs, but it also had some wonderful handcrafted goods. One small alley is dedicated to the tinkers who create handcrafted platters, bowls and coffee services.
We took a walking tour of the old town with Dino Lemeš from Sarajevo Discovery who explained the complicated history of his city. We visited the site where the assassination that ignited WW1 took place. 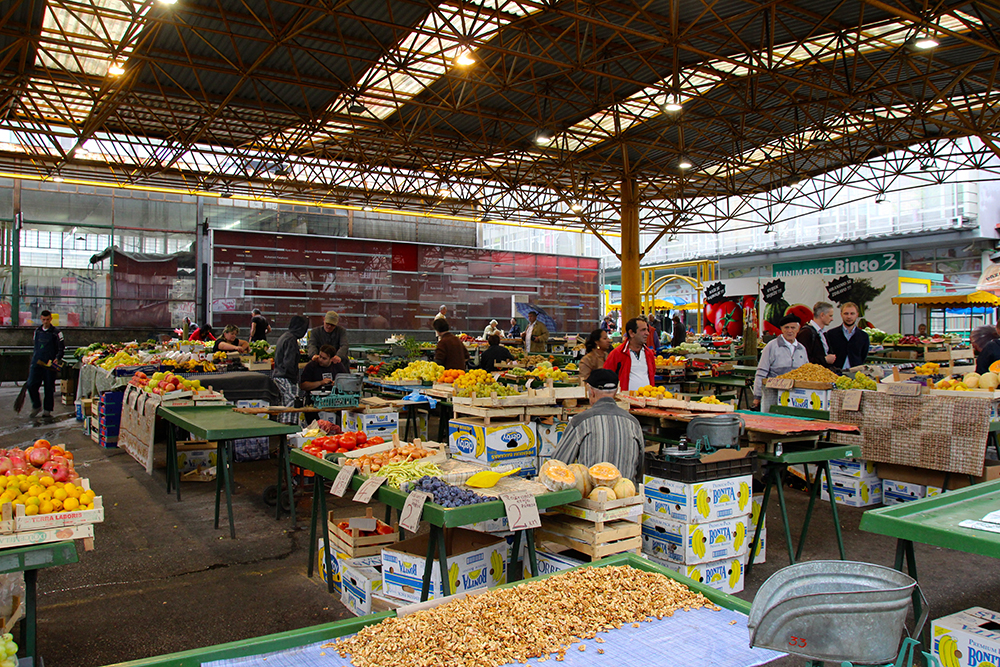 He told us that the tradition is that if the church bell rings while you are in the middle of saying something, then it must be true. As the church bells rang frequently and for long stretches, people in Sarajevo must be very truthful. We heard the bells ringing throughout the night before, and also heard the call to prayer early in the morning. We learned of a restaurant that was forced to close because they were ruined overnight when word got out that they cheated a tourist. 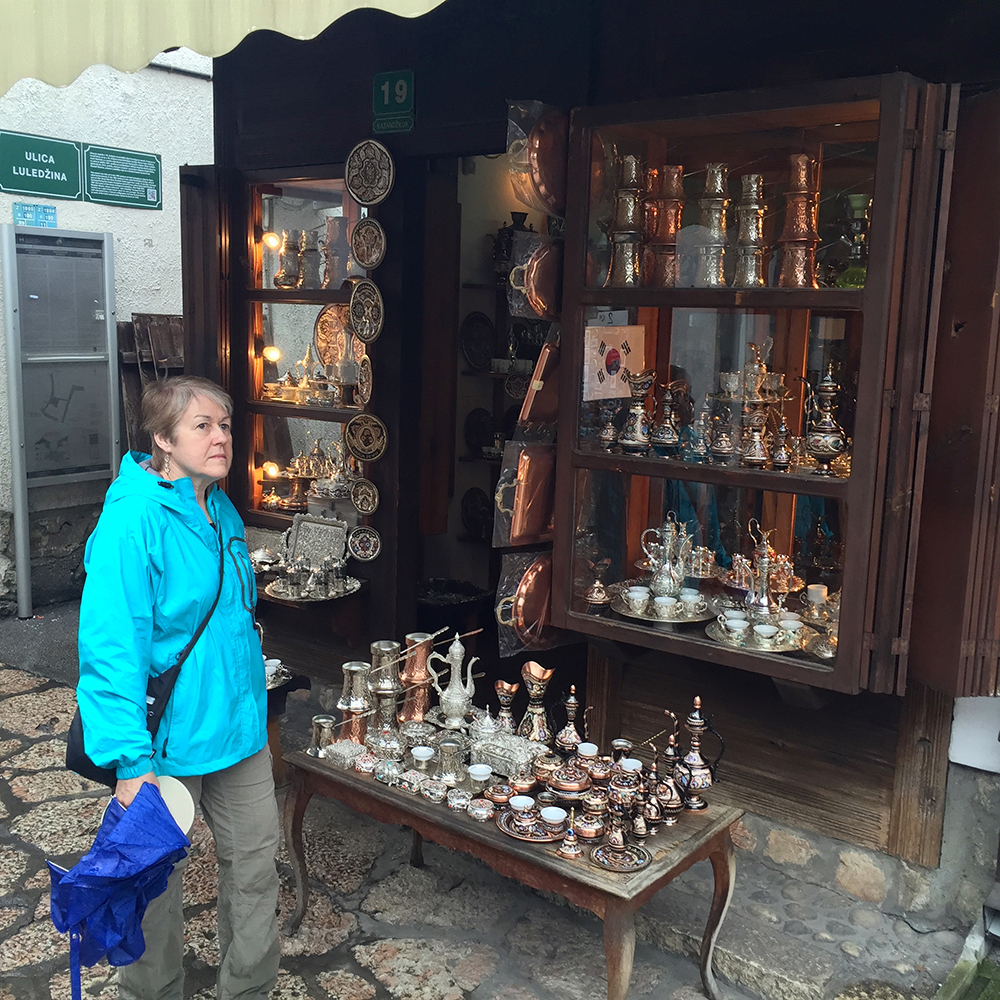 I had the simplistic and incorrect understanding that Sarajevo was a Muslim city. The old town is definitely dominated by a large mosque, but close by you can also find a Jewish synagogue, an Orthodox church and a Catholic church. All of these date back to the days of the Ottoman empire. The Jewish population is much smaller because of the lives lost during WWII, so three of the original four synagogues in the city have been given to the city as an Art Museum, a Concert Hall and a Jewish Museum. We toured one of the old Jewish cemeteries on the hill above the town. Even more noticeable are the large number of Muslim cemeteries that are reserved for those who die protecting someone else. They are filled with the dead from the Bosnian War. 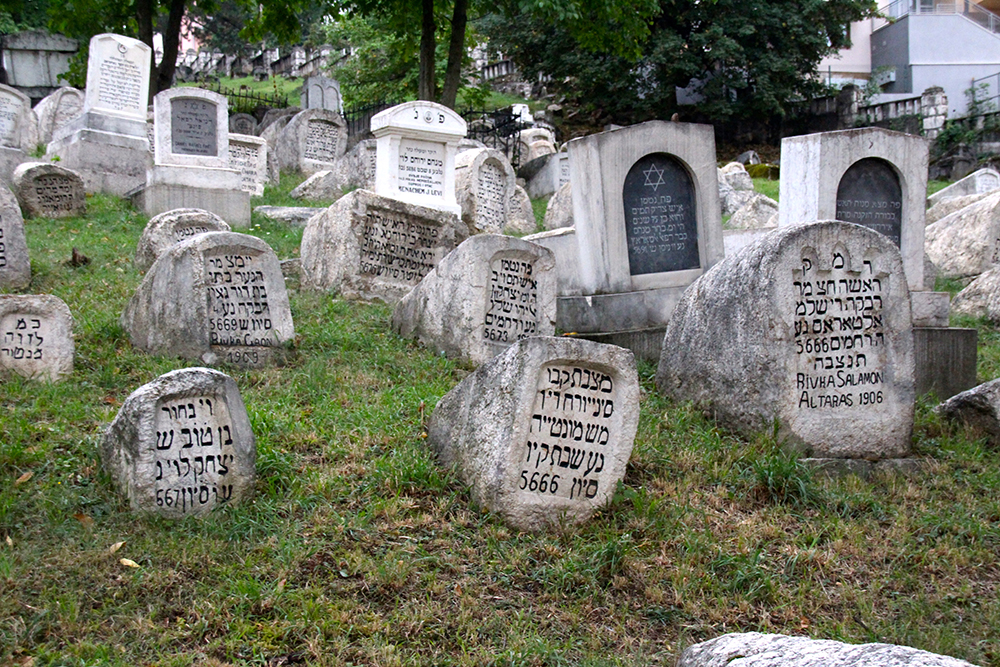 Dino also pointed out scars on the sidewalk and street called ‘Sarajevo roses,’ which are places where shells fell into the city from the besieging Serbian forces. They are painted red in places where they caused a loss of life, including two shells which exploded in or near the city market. It was odd then to hear Dino say that some of the older generation are nostalgic for the days of the siege when everyone was working together.
A second guide, Nyad, drove us out to the Sarajevo Tunnel Museum. We toured the tunnel that Bosnian forces dug to resupply the city. Food and weapons were smuggled into the city around the Serbian forces and directly under the UN forces who held the airport. Our driver was one of the soldiers who had made the journey through the tunnel for supplies. 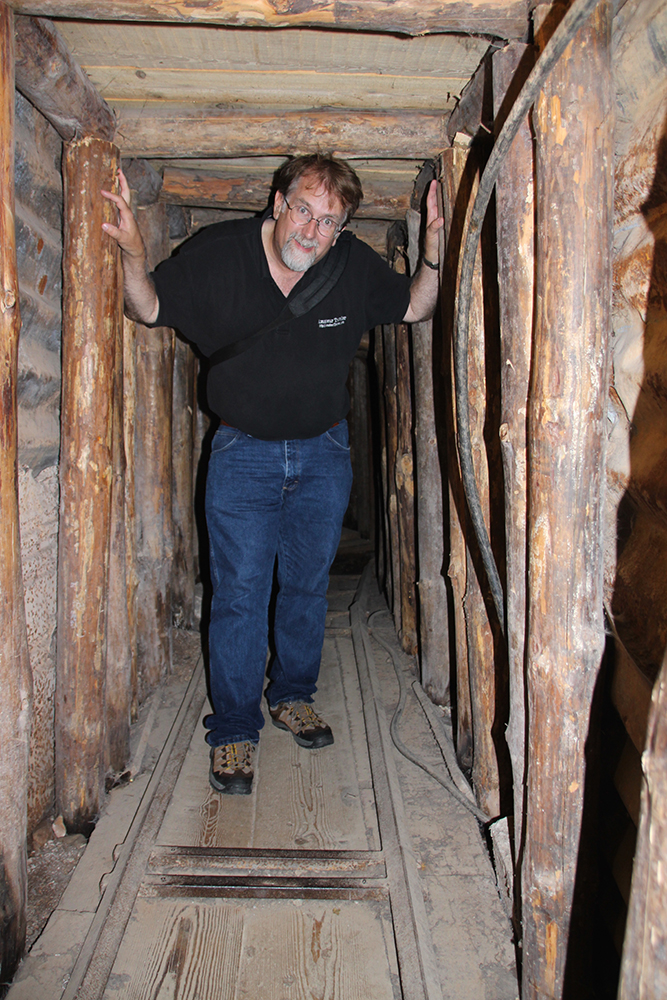 Recommendations From a Local
My daughter, Liz, works with a woman from Sarajevo who recommended some restaurants in the old town for traditional Bosnian cuisine.
Buregdzinica Bosna had one of the area’s specialties, pita, which is rolled dough with fillings such as meat, cheese, spinach, potato and onion. It was served with a yogurt sauce and was delicious. We misread the menu and thought each meal was 14 KM, which would be under $10, but when we got the bill, the total was only 22KM, or roughly $14 for 5 people.
We tried the restaurant Petica Cevabzinica for Bosnia’s most popular dish, Ćevapčići. This dish is a grilled meat served with chopped onions and flatbread. Add in a little sauce or grill those onions and I think we would have liked it better.
We also stopped for a small ice cream near where the old town and the new downtown meet. The vanilla, chocolate, and hazelnut were all deliciously rich, and only cost 1 KM each, so less than $1.
She recommended one of her family’s favorite restaurants, Palma, to visit for dessert. It’s a 5- to 10-minute cab ride from the downtown area and it’s great for cake and coffee. 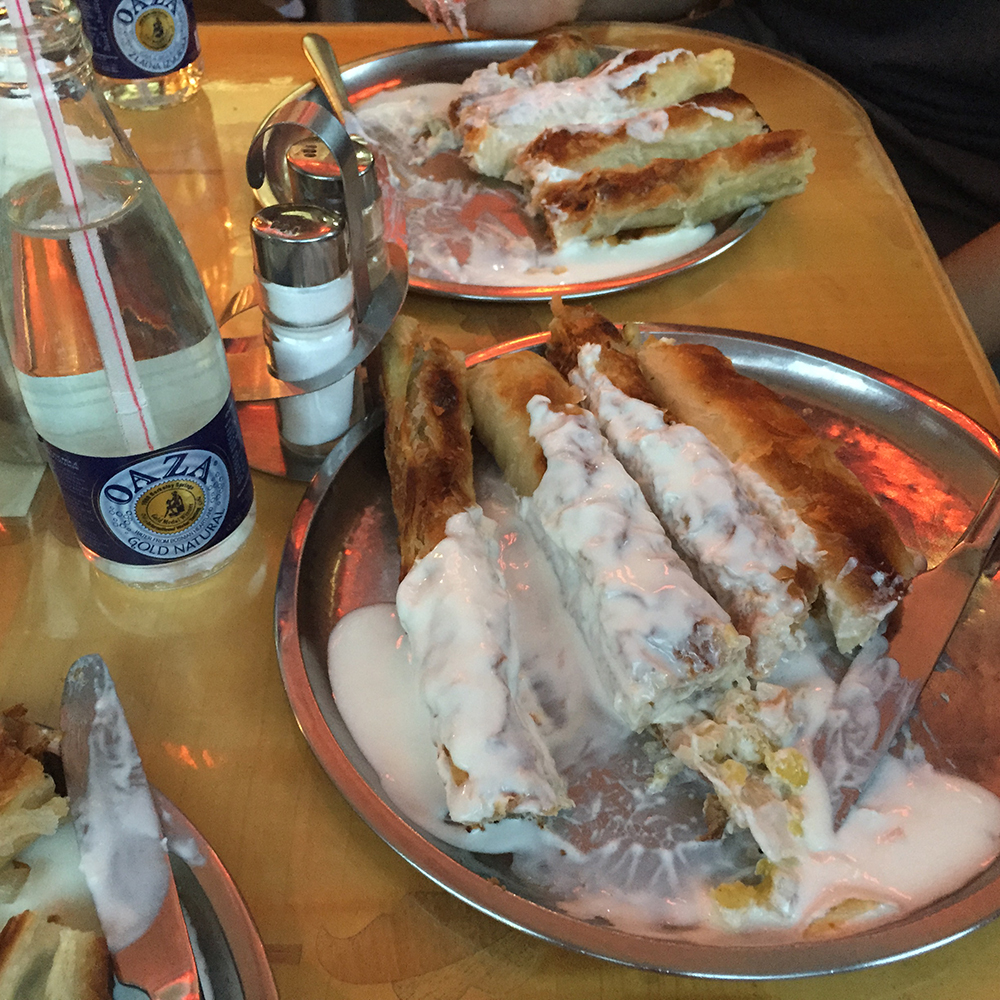 Accommodations
We stayed at Hotel Michele, which was a lovely older hotel. We had a suite, with two bedrooms—one double and one triple—and a spacious living room and kitchenette. It was easily larger than our first apartment. It was up the hill from Old Town, about a 10-minute walk. They served a wonderful full breakfast in the morning. 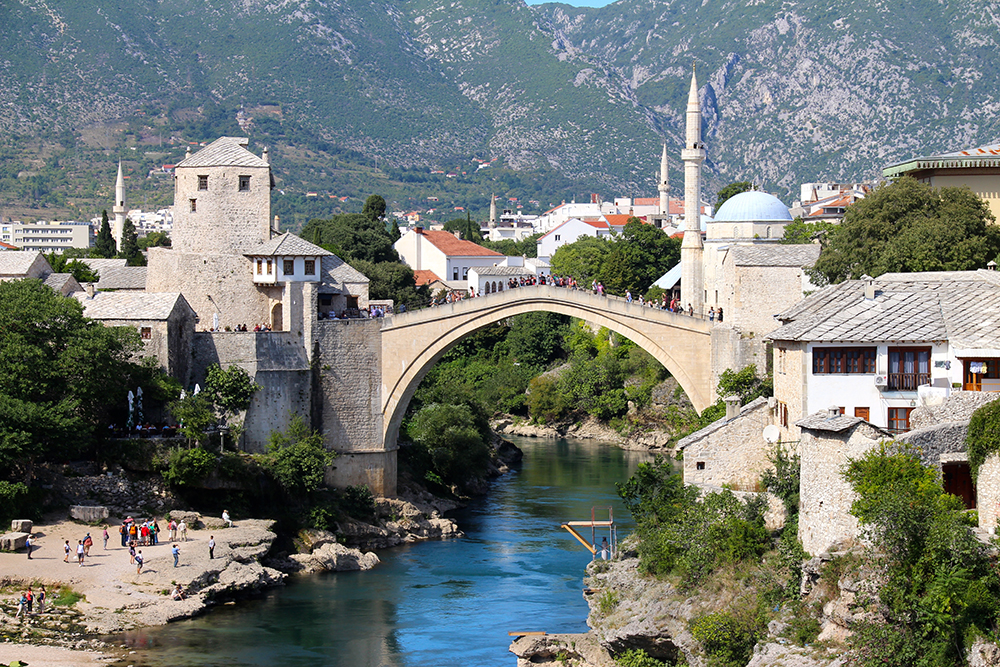 Getting to Dubrovnik/Mostar
We hired a van and a driver to travel from Sarajevo to Dubrovnik, which took most of the day. We stopped in the beautiful city of Mostar for a tour and for lunch overlooking their famous bridge built in Ottoman times (and rebuilt since the Bosnian War). Mostar has a lot more tourists than Sarajevo as it is a popular spot for day trips from Dubrovnik. Sadly, this does mean that it has more petty theft. Our driver made sure that everything in the van was out of sight when we parked and advised us to keep a close eye on our wallets and purses. We weren’t nervous as my wife carries a Pacsafe Slingsafe™ 100 GII anti-theft shoulder bag which is theft-resistant. My SLR camera is always on a Carrysafe® 50 anti-theft DSLR camera wrist strap. 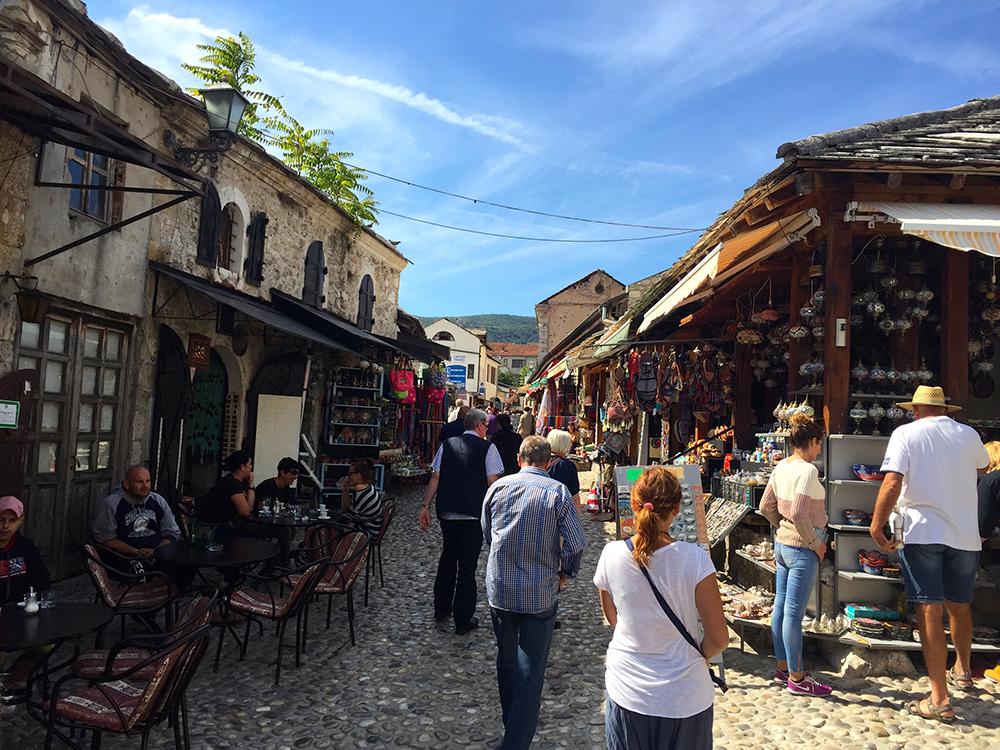