The 6 Largest Sports Stadiums in the World

Sports unite people to come together in support of their favorite team. There is no better place to do this than the thrilling atmosphere of your team’s home stadium. While stadiums can range in size and the level of rambunctiousness of the fans, the thrill of watching your team score on their arch rivals at home is an event enjoyed by nearly everyone on this planet. Excluding race car tracks, here is a list of the largest stadiums this world has to offer.

To make sure you can focus 100% on rooting for your favorite team, get a Pacsafe anti-theft bag. Our lockable and cut resistant daypacks, crossbody bags and other styles are the perfect stadium accessory and can even be locked to your seat! Get our latest styles here  SHOP NOW

Rungnado May Day Stadium – Pyongyang, North Korea
The stadium with the largest capacity is located in a country few people would probably imagine. In what is known as a totalitarian, stalinist dictatorship, North Korea holds the title for the largest stadium on earth, that is still being used today. The capacity for this monstrous structure is at a whopping 150,000 people and it is used by the national soccer team as well as a handful of other state sponsored events.

Salt Lake Stadium – Kolkata, India
Also located in the Asian continent is the second largest stadium on the planet. This multipurpose stadium is located in Eastern India and hold 120,000 people. It was built back in 1984 and is composed of 3 tiers in an elliptical shape. The national soccer team of India are the primary users of this gargantuan stadium, although there are a number of other purposes that the structure serves. 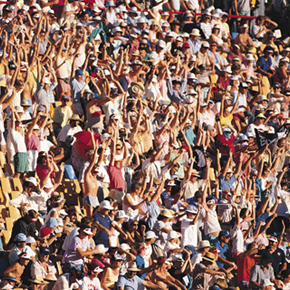 Michigan Stadium – Ann Arbor, Michigan, USA
The third larget stadium in the world is located in the northern part of the midwestern United States. It is home to the Wolverine football team at the University of Michigan and hold the nickname ‘The Big House.’ The stadium currently holds 114,000 people and is known to have some of the loudest and wildest crowds in the country.
Beaver Stadium – State College, Pennsylvania, USA
Built for Penn State’s Nittany Lions Football team, Beaver Stadium is the fourth largest stadium in the world. It has a capacity of 107,800 people and known as one of the toughest places for opposing teams to play in the United States. The stadium was named not because of an abundance of beavers in the State College area, but after a former Pennsylvania state governor by the name of James A. Beaver.
Estadio Azteca – Mexico City, Mexico
The fifth largest stadium in the world holds 105,000 people and is located in the capital of Mexico. It is home to both the Mexican National Football team and a Mexican club team by the name of Club America. Not only was this famous venue home to soccer in the 1968 olympics, but is also the only stadium in the world to host two FIFA World Cup finals. It was originally constructed in 1961, but has been renovated more recently. 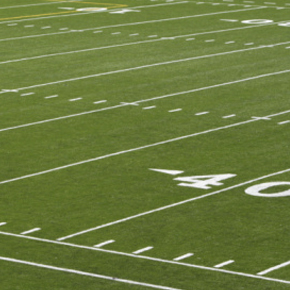 Ohio Stadium – Columbus, Ohio, USA
Coming in at number 6 on the world’s largest stadium, Ohio Stadium is another massive structure located in North America. It’s primary reason for construction was to house the University of Ohio’s, Buckeye Football team. Nowadays in addition to use for the University it also provides a home field for the Columbus Crew, a professional soccer team of the MLS. It also serves as a venue for a number of music concerts and various other large ceremonies.