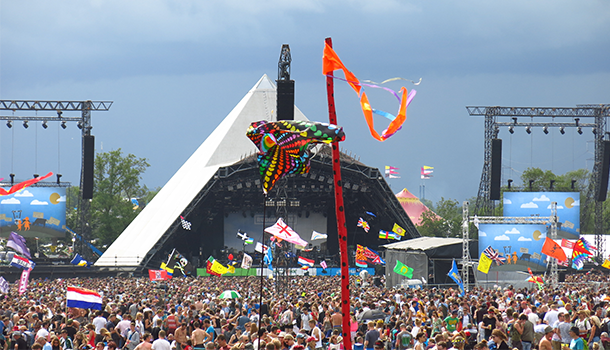 Music festivals have come a long way since the Woodstock days. Once known for their hippy culture, music festivals have now expanded into music genres and locations all over the world. From EDM to indie; Japan to Mexico, there’s a festival catered to almost every music lover out there. Even if you’re not a music fan, the cultural experiences each country has to offer will be an eye opener. Here are some you will definitely want to add to your travel wish list when you’re planning your list of vacation spots.
1. Glastonbury – Somerset, UK
All hail the godfather of music festivals! Every year, the Glastonbury claims a chunk of Somerset for music, hippies, healing, mischief, and cider – lots of it. Ranging from rock to reggae to metal to dubstep, over the years Glastonbury has seen awe-inspiring lineups including Coldplay, Foals, Beck, Sigur Ros, Fatboy Slim, Bastille, and the list goes on. The Glastonbury Festival lasts for  4 glorious days you don’t want to miss.
2. Coachella – Indio, USA
Yes, THE music festival right now. Often known for its array of fashionistas more than the music. Every year the festival boasts celebrity sightings such as Kendall and Kylie Jenner, Vanessa Hudgens, Alessandra Ambrosio and many more. And the music? You’ll be hearing the likes of previous headliners LCD Soundsystem, Calvin Harris, Drake, Arcade Fire, and many more. Music any indie, rock, hip hop or electronic dance music lover will enjoy. It’s the festival where all those fashion bloggers post their #OOTDs giving us major FOMO!
3. Fuji Rock – Niigata Prefecture, Japan
Just how far are you willing to go for the love of music? To get to the Fuji Rock music festival, you’ll require a trip up a mountain by cable car. This 20-minute high wire travel will take you to the Daydreaming stage, a beautiful setting in the Naeba resort where you might catch bands such as the Red Hot Chili Peppers, Disclosure, Tom Odell, Stereophonics to name a few from previous years. Dubbed the largest and best music festival in Japan, we’re sure it’s totally worth the climb.
4. St. Jerome’s Laneway Festival – Australia
One of the biggest music festivals in Australia, this is heaven for indie music lovers. What started off with bands performing at hole-in-the-wall pubs in Melbourne, the line-up is now filled with critically acclaimed indie bands. Previous acts who have performed include  Esese, Royal Headache, The Smith Street Band, Flume, and many more are queuing up to play. Not only that, Laneway has now franchised its way overseas, to New Zealand, Singapore and the US.
5. Vive Latino – Mexico City, Mexico
When we think Latin and Spanish bands, salsa usually comes into mind. But Vive Latino is arguably the most important Spanish-language rock music festival in the world. Year after year, Latin and Spanish rock bands from around the world will pack their gear and head over to Mexico City to perform at Vive Latino. But of course, the festival is not just limited to all things Latino, bands of all other nationalities and genres have performed.
6. Lake of Stars – Mangochi, Malawi
Imagine sitting by a blue lake amongst golden sands, while basking in nature’s glory, and as you take it all in, you’re grooving to your favourite (or maybe discover a love for) Afropop band or DJ. That’s exactly what Lake of Stars is. Set in Lake Malawi, you’ll expect to see sunrise over the lake, plenty of music to dance yourself silly to – from a pleasing mix of international acts to homegrown talents, and party DJs.
7. Bestival – Isle of Wight, UK
That’s what you get when you combine Best and Festival, perhaps? Four straight days of fun, sun, and music, Bestival has a stellar reputation for awesome eclectic line-ups. Bands that will be performing at Bestival 2016 are Diplo, The Cure, Major Lazer, Katy B, and Goldie, so you’ll be expecting music genres ranging from rock to electronic to hip hop.  It is also filled with kid-friendly activities such as bouncy castles, face painting, go-carts, and many more even adults might be envious. This is the place where festival going mums and dads can even introduce music festivals to their little ones.
Well, there you have it. We’ve given you the best travel guide when it comes to music festivals, so it’s time to live fearless! Be sure to bring along aTravelsafe portable safe with you to secure your valuables as every accommodation offer different amenities. Just buy that ticket and experience what the world has to offer, already!