The 7 Best Safari Destinations in Africa 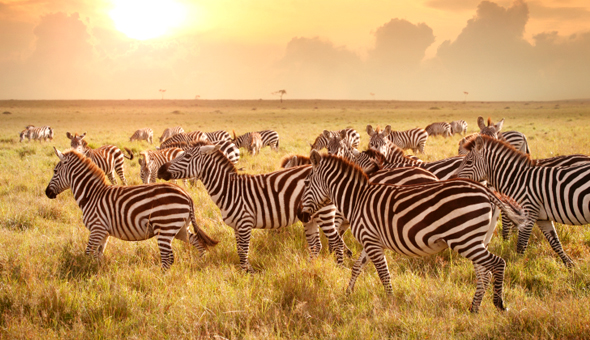 
An African safari is one of the best adventure travel experiences imaginable, offering travelers the chance to spot some of the most amazing wildlife on the planet in its natural habitat. There are few things more thrilling than watching a pride of lions on the hunt, or a herd of wild elephants meandering slowly across an open savannah while zebras trot effortlessly alongside. There are numerous places in Africa that can offer these experience to visitors, but some are definitely better than others. Here are the seven absolute best safari destinations on the continent.
Serengeti (Tanzania)
The quintessential safari destination is without a doubt the Serengeti in northern Tanzania. Each year, this rolling grassland region serves as a backdrop for The Great Migration, during which millions of animals move across the open plains in search of food and water. The migration consists of massive herds of wildebeests, gazelles, and zebra, all traveling together, while predators such as lions, leopards, and cheetahs follow along looking for prey.
With such an impressive number of elephants, cape buffalo, hyenas, jackals, and other wild beasts, and you begin to understand why this is such an amazing place to be. The best time to go is December through March, although it is still a memorable experience at just about any other time of the year as well.
Maasai Mara (Kenya)
The Maasai Mara in Kenya is a continuation of the Serengeti as it passes across the border from Tanzania. The Great Migration passes through this region too, with the same large herds of animals arriving in July and staying into November. During that time of the year, there are literally millions of animals spread out across the Mara, making it the perfect place to watch the Migration unfold. The Maasai Mara is also legendary for its large population of big cats, making it one of the best places in Africa to spot lions, leopards, and cheetahs on the prowl. These predators are common throughout the area, which only adds to the allure.
Bwindi Impenetrable Forest (Uganda)
For a completely different kind of safari experience, travel to Uganda to trek through the Bwindi Impenetrable Forest. This thickly-wooded region is home to approximately half of the world’s remaining mountain gorillas, a species that has been on the critically endangered list for decades. In recent years the gorilla population has started to rebound however,  in no small part due to sustainable tourism efforts by the Ugandan government.
Visitors actually travel on foot into the forest, where they get the chance to not only spot these amazing primates in the wild, but actually interact with them as well. While there, it’s not uncommon for the gorillas to actually approach visitors, touching and even grooming them. Many who have had the opportunity to visit this amazing place describe it is a life-changing experience. 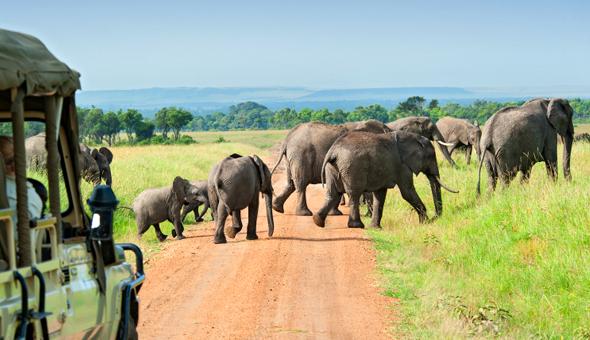 
Okavango Delta (Botswana)
Botswana is home to one of the largest inland seas on the entire planet, which is formed each year when seasonal flooding from the Okavango River spill into a section of the Kalahari Desert each January and February. The flooded plains forms the Okavango Delta, which attracts countless animals looking for food and water. Over the first half of the year the normally dry desert actually comes alive with vegetation, making it a temporary oasis for wildlife before most of the water evaporates with the arrival of summer. During that time the Delta is home to a large number of hippos, elephants, giraffes, wildebeest and rhinos, as well as countless impalas and gazelles. There are also about 400 species of birds known to inhabit the area, making it a particular favorite of ornithologists too.
Kruger National Park (South Africa)
South Africa is the one destination on that continent that truly has something to offer every kind of traveler. From vibrant, modern cities filled with culture and cuisine, to fantastic outdoor playgrounds tailor made for backpackers and climbers, the country is able to offer an amazingly diverse experience to visitors. It even boasts a fantastic wine country for those looking for a peaceful escape in the tranquil countryside. But South Africa is also home to one of the best safari destinations on the entire planet in the form of the legendary Kruger National Park.
With the most diverse collection of animal species found anywhere in Africa, Kruger is probably the best place to spot all of the Big 5—lions, leopards, elephants, buffalo and rhinos. It is also home to some of the best safari lodges on the continent as well, with accommodations ranging from merely comfortable to incredibly luxurious. One of the best parts about a visit to Kruger is that travelers are able to actually go on self-guideded game drives. That means that you can rent a vehicle and explore the park at your leisure.
Zambezi Valley (Zambia)
If you want a safari experience that truly helps you get away from it all, then travel to the Zambezi Valley in Zambia where much of the region remains wild, untamed, and undeveloped. A safari in this part of Africa is a wilderness experience in every sense of the word, taking visitors deep into the bush. Highlights include walking safaris that wander to the very edge of the Luangwa River, which is often teeming with hippos.
The region is also well known for its big cats, with large prides of lions roaming the area, and an unusually high number of leopards who seem naturally drawn to the massive trees that are common in the forests there. Other species found in the valley include zebra, wildebeest, kudu, and spotted hyenas, as well as the more elusive wild dogs that are native to Zambia. If you’re looking to avoid a potentially crowded safari destinations, and want to truly get in touch with nature, than the Zambezi Valley is just the place for you.
Ngorongoro Crater (Tanzania)
If you have a limited amount of time for a safari, but would still like to see as many animal species as possible, than the Ngorongoro Crater is the place to go. Formed out of the collapsed caldera of a massive volcano that went extinct long ago, Ngorongoro is home to a completely self-contained ecosystem with thousands of animals that never bother to leave the crater. Those animals include cheetahs, elephants, hippos, crocodiles, and the very rare black rhino
Ngorongoro also has one of the densest populations of lions found anywhere in Africa, with several distinct prides living within the natural enclosure of the crater’s walls. This is truly a wondrous place filled with amazing sights at just about every turn, and a true safari experience contained to a relatively small area.