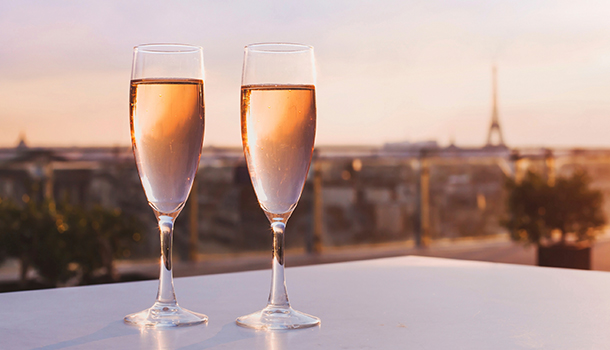 Everyone loves a skyline with their cocktail, but some places do it better than others. At the end of a long day – especially when you’re sightseeing in a new city — there’s nothing like grabbing a martini and taking in the views from high above. These glitzy rooftop bars are some of the very best in the world, so keep an eye out for them on when you’re browsing travel guides or taking a trip. Come at sunset, and stay until dark at the world’s best rooftop bars.
Flair, Shanghai
Flair is located on the 58 th floor of the city’s IFC tower, and is the Ritz-Carlton’s rooftop bar. From here you’ll have exceptional views of the Pearl Tower and the rest of the city. Be warned, it does get super busy on the warmest days.
Ce La Vie (Formerly Ku Dé Ta), Singapore
For those who like to travel with style, the iconic Ku Dé Ta has recently undergone a makeover and has been reinvented as Ce La Vie. The massive rooftop restaurant and bar is located smack dab in the middle of Singapore above the Marina Bay Sands, and boasts panoramic views of the city. It also has a poolside terrace and club lounge. Most people hang out in the open-air lounge area, but there’s also a circular Sky Bar with a public observation deck in the restaurant.
Mr. Purple, New York City
There’s nowhere better to be than a rooftop bar on a summer’s day in New York City. Mr. Purple is the rooftop bar for Hotel Indigo, and it’s quite a space. You can spend the whole afternoon lounging by the pool with a mojito in hand, or snapping photos of the 360-degree view of Manhattan.
Hotel Pulitzer, Barcelona
Barcelona knows how to party. Although quiet during the day, the Hotel Pulitzer’s garden terrace turns into a classy bar scene in the evenings. There’s live music every night – including popular local DJs – and the drinks menu is creative. But even during the day, its white couches and posh furnishings make for a great spot to just hang out.
Four Seasons Hotel, Mumbai
The Four Seasons Hotel Mumbai is home to one of the most epic rooftop bars in the world. It’s located on the 34 th floor, and is open year round. You’ll feel oddly isolated from the hubbub of Mumbai up here – at night, you can even see the stars. You’ll get a full 360-degree view of the city, and at sunset, it’s one of the best places to be.
Nobu, Doha
You might have noticed that most of these rooftop bars are found in hotels, and Nobu is no exception. Nobu is found at the Four Seasons Hotel Doha, and the entire three-level space looks like an oyster shell. It’s in the middle of the bay, with insanely beautiful views over the Arabian Gulf (and the ultra-luxury yachts at the Four Seasons Marina). It gets busy, so show up as soon as the bar opens at 6 PM.
Restaurant Les Ombres, Paris
Want a front-row ticket to an epic view of the world’s most iconic structure? This restaurant literally sits in the shadows of the Eiffel Tower – hence the name, Les Ombres (the shadows). If you’re going to splurge in Paris, this is a good place to do it. Grab some French wine and food, and settle in.

Candice Walsh
Candice Walsh, aka Candie, is a 20-something freelance writer, living and working her way around the world. She chronicles her journey to living life on her own terms and to have fun in the process on FreeCandie.com.